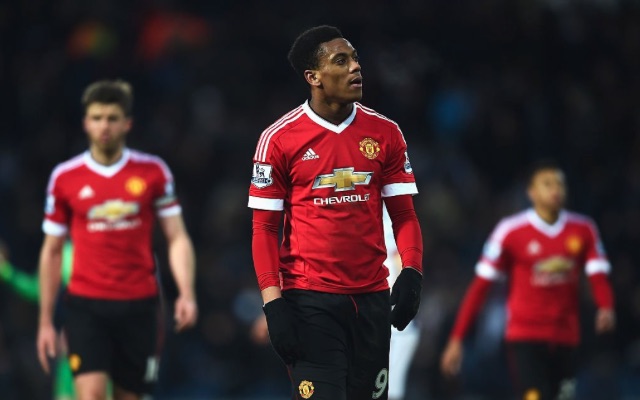 Manchester United’s recent revival came to a halt at The Hawthorns this afternoon as West Bromwich Albion record their first home win over the Red Devils in 32 years.

Juan Mata was sent off for the visitors for two yellow cards in the space of two first-half minutes, and Salomon Rondon punished the 10 men with the only goal after the break.

Louis van Gaal’s charges remain three points adrift of the Champions League places after this slip up. Here, CaughtOffside rates how United performed in the Midlands.

Not called into action a great deal. Could do nothing to prevent Rondon’s goal.

Fortunate to be recalled at the expense of Guillermo Varela, who has been excellent of late. Won’t be keeping his place for Thursday’s match with Liverpool on the back of this nervy showing.

A strong defensive display meant that Saido Berahino barely had a sniff of goal all game.

Rondon was a real handful and Blind largely coped well despite his physical disadvantage. However, he did allow the striker too much space for his goal, and Rondon finished emphatically…

Tidy on the ball but not strong enough defensively at times. His final delivery was pretty average.

Was forced to sit deep after Mata’s red card and could not influence the game with his passing.

Similarly, Mata’s dismissal meant that Herrera had to curb the attacking instincts which can make him such a productive player for the Red Devils. Did nothing wrong, but was subbed on the hour.

United had few chances to break forward when they were a man short and Lingard wasted some of them.

His stupid red card cost United a chance of victory. His first yellow card for blocking Darren Fletcher from taking a free-kick was utterly foolish, and his wild hack of the same player equally needless.

United’s most encouraging attacking moments came when the Frenchman burst in from the left flank. He swapped with Rashford in the second half, but became more and more isolated as the game went on.

A difficult outing for the 18-year-old sensation because United ended up defending for large parts.

Understandably found it tough to wrestle control of a Baggies-packed midfield for United.

Did little to make United more dangerous going forward upon his 75th-minute introduction.

The youngster saw a chance of glory late on when the ball sat up for him, but he scuffed his ambitious volley in hilarious fashion, as you can see below. However, he made a fine covering tackle on Rondon.