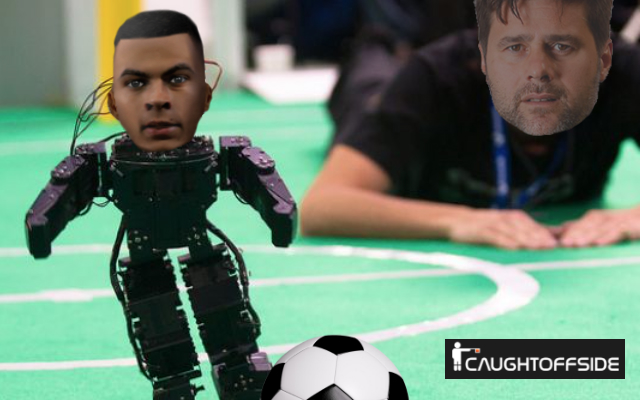 Tottenham Hotspur teenager Dele Alli must be made of some pretty sturdy stuff.

In his first season mixing it with the big boys of the Premier League, the 19-year-old has more than held his own.

With seven goals and six assists in 27 league games, Alli has become a key cog in Mauricio Pochettino’s well-oiled machine.

But the player himself is not a machine, his manager has stressed.

Spurs boss Pochettino made that point on Monday, when he also revealed that Alli has been nursing an injury in recent weeks.

“He is an incredible athlete, yes, but he is not a machine,” Sky Sports quote Pochettino as saying.

“He has a problem in his ankle and knee. He was good before the [Arsenal] game, but the players are not machines.”

When Asked whether Alli might need to be rested between now and the end of the season, Pochettino added: “It depends.

“We assess the players every day and we take the best decision from the team.

“We try to look after all of them. We played a lot of games and we come from a difficult season, because we’ve played a lot.

“I think that we have good staff, good sports science and medical, who can look after the players in a good way.

“We have a lot of players who are young and in their first or second season in the Premier League.

“It’s very tough and we spend a lot of time analysing and to find information to give the best training sessions or recovery, or to find the best way to help them.”

Alli played the full 90 as Spurs drew 2-2 with Arsenal on Saturday, having made a 29-minute cameo in the 1-0 defeat to West Ham United three days earlier.

The former MK Dons starlet has recently been operating as part of a three-man attacking midfield unit for Spurs, lining up to the left of playmaker Christian Eriksen.

As well as playing for Spurs, Alli could well have more international football to focus on this season.

Alli, who made his England debut in November, is seen by many as an obvious pick for Roy Hodgson’s Euro 2016 squad this summer.