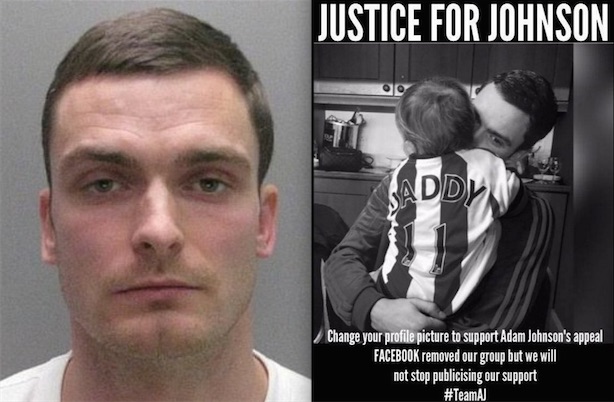 Disgraced footballer Adam Johnson is currently awaiting sentencing after being found guilty of grooming a 15-year-old girl and engaging in sexual contact with her.

Prison seems inevitable for the former Manchester City, England and Sunderland winger. And most people would see jail time as justice.

However, Johnson’s sister, who has launched a campaign called ‘Justice for Johnson’ seemingly disagrees.

Faye Johnson created a Facebook group, which site administrators have since removed, but her poster (above right) continues to be shared.

Johnson does have some sympathisers, such as Katie Hopkins, who said that he is “not a paedophile” and that he “doesn’t deserve prison and a Twitter lynching”.

Controversial Dail Mail columnist Hopkins also claims that Johnson – a “cheating, selfish, arrogant, dick-driven, dim-witted specimen” in her words – “was only ever guilty of being stupid”.

Judging by the reaction to the ‘Justice for Johnson’ campaign, Hopkins is in the minority.

This Justice for Johnson thing is really odd. Seriously are people fully retarded. So you want justice for someone who has admitted guilt?

This Justice for Johnson is sickening.

Saw the ‘Justice for Johnson’ campaign and thought this would be awkward if it was Adam, then I didn’t laugh…..

Justice for Johnson has got my blood boiling. Johnson is a self-confessed nonce and his delusional sister is just trying it on. #Scumbags