Prolific PSG strikers Zlatan Ibrahimovic and Edinson Cavani were both on the scoresheet in France, but John Obi Mikel’s crucial away goal has given the Blues something to hang onto.

Guus Hiddink is without captain John Terry, who confirmed yesterday on his official Instagram account that he has lost his battle to recover in time from his hamstring injury.

Here, CaughtOffside predicts Chelsea’s starting XI for the visit of the Ligue 1 champions…

SEE MORE:
John Terry injury: Chelsea captain reveals he will miss PSG clash in emotional statement
Chelsea want Romelu Lukaku back but will have to pay double what they sold him for
Chelsea encouraged by talks with representatives of Tottenham boss Mauricio Pochettino

Had mixed fortunes in the first leg. Ibrahimovic’s free-kick needed a huge deflection to get past him, but the Belgian was arguably too easily beaten at his near post by Cavani in the second half.

Only he and Willian have played in all seven of Chelsea’s Champions League games this season.

With Terry still out, Ivanovic will stay in central defence and retain the captain’s armband.

Made an absolutely heroic block in the latter stages at Parc des Princes to keep Chelsea in touch.

The 21-year-old faces surely the biggest game of his young career. Coped fairly well in the first leg.

Scored just the sixth goal of his nine-year Chelsea career to get them an important away goal on the board. Hiddink has preferred him to Nemanja Matic and extracted the Nigerian’s best form.

The Spaniard should be refreshed after only having a small cameo in Saturday’s 1-1 draw with Stoke City. Has a massive job to do – both in terms of creating chances and doing his defensive duties.

Chelsea’s top scorer in the competition this term with a healthy five goals in seven games from midfield.

The London Evening Standard reports that Pedro is available again after a hamstring strain. Hiddink must make the choice whether to restore the Spaniard or stick with Oscar behind the striker.

Ineffectual in the reverse fixture, but has since scored his first open-play goal of the season. Tonight would be the perfect time for the Belgian to finally come to the party this campaign.

Rested over the weekend as a precaution, Costa has a point to prove after PSG branded the striker a “fraud” on their social media channels, as Sky Sports reports. A goal or two will shut them up. 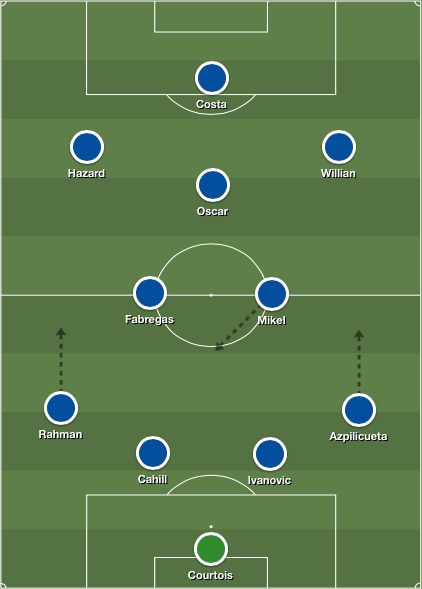