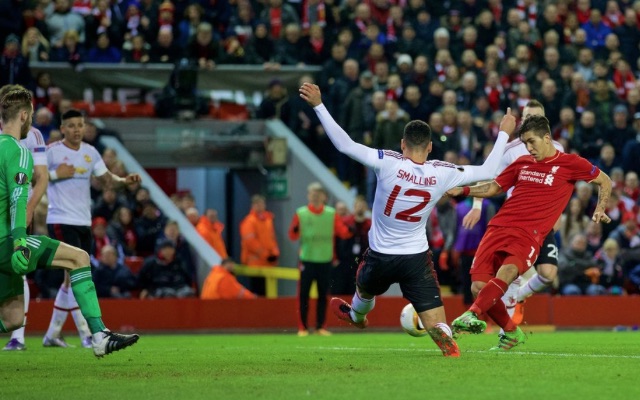 Following Manchester United’s 2-0 loss to Liverpool in the Europa League on Thursday night, Paul Scholes and Rio Ferdinand launched a scathing attack on the performance from their former club.

Goals from Daniel Sturridge and Roberto Firmino have undoubtedly put Jurgen Klopp’s side in control ahead of the second leg of their round-of-16 clash at Old Trafford next week, as the Reds dominated proceedings in the first European encounter between the two English giants.

However, it was the performance from United that was the biggest talking point on the night, with the entire team failing to convince as they were clearly second best and by some distance.

“United were a shambles. At 2-0, they’re still in the game, don’t get me wrong, but when you’re at Man United, I think there’s certain standards you have to live up to that and they’ve fallen well short,” Scholes told BT Sport.

Meanwhile, Ferdinand didn’t hide his disappointment with the situation either, adding: “To see the lack of fight, the lack of urgency, the lack of cohesion in the team, there’s going to have to be a massive, massive improvement in the next leg at Old Trafford because that wasn’t good enough.”

Scholes has been critical of his former side, and coach Louis van Gaal’s tactics, for some time, and this was another case in point where the Dutchman failed to deliver.

While the players will rightfully take some of the blame too, United will have to recover quickly from their setback with their FA Cup tie against West Ham United this weekend fast approaching.

Van Gaal has faced heavy criticism all season long over his approach and mentality with regards to his team, and Thursday night would have reflected badly on him with speculation continuing to link Jose Mourinho as his successor, despite claims that the current boss will stay on, as noted by the Metro.

Although United have improved in recent weeks, their display against Liverpool would have only added to the calls to have the former Ajax and Barcelona replaced. Without being able to consistently deliver and show that his United side have an identity, a direction in their play and key individuals whom they can rely on week in and week out, then it inevitably will lead to Van Gaal being sacrificed.

Wins over Arsenal and Midtjylland last month were impressive, but perhaps they were anomalies as opposed to what Van Gaal can actually get out of this squad.