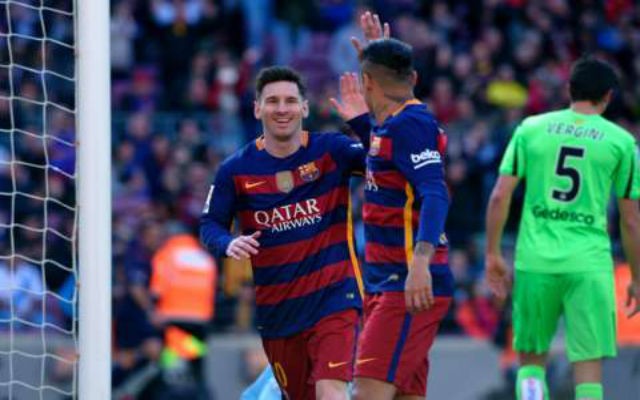 Barcelona thrashed Getafe 6-0 at the Nou Camp on Saturday afternoon during a thoroughly one-sided game in La Liga.

A Juan Rodriguez own goal put Barcelona ahead inside ten minutes, a Munir El Haddadi header made it 2-0, Neymar added the third, a beautiful Messi strike made it four, Neymar scored a second for number five, and an Arda Turan overhead kick completed the rout.

The biggest shock on the teamsheet was the absence of Luis Suarez from the Barcelona XI. He is only one booking away from a ban and Luis Enrique opted to rest him ahead of Arsenal’s visit on Wednesday. Elsewhere, Javier Mascherano dropped out due to suspension, though Neymar returned from his ban.

Getafe started with both Santiago Vergini and Stefan Scepovic who are on loan from Sunderland and Celtic respectively.

The started at a furious pace, and within eight minutes Barcelona had the lead. A visionary pass from Messi picked out Jordi Alba, and his crossed was prodded into his own net by the unfortunate Juan Rodriguez.

Moments later it should have been 2-0. Barcelona were given a penalty after Neymar was chopped down by Emiliano Velazquez – but Messi saw his kick pushed away by Getafe keeper Vicente Guaita.

Despite the miss, Barcelona didn’t have to wait too long for their second goal. In the 19th minute, Andres Iniesta and Messi combined beautifully, and Munir El Haddadi headed home from a couple of yards out.

The onslaught kept coming – in the 30th minute Messi hit the crossbar and in the 32nd minute it was 3-0.

This time Neymar was the scorer. Sergi Roberto won the ball on the half-way line, slipped it to Messi, and his pass allowed the Brazilian execute a lovely first-time finish.

Messi hit the bar again five minutes later, but he wasn’t made to rue the chance for long as he made it 4-0 in the 40th minute. It was the goal of the game so far as he expertly lashed Arda’ Turan’s effort into the bottom corner from 25 yards out.

The half-time break did nothing to stem the flow of goals. Neymar added number five in the 50th minute as Messi provided his third assist of the game. It was an easy goal – Getafe were sliced open after some splendid link-up play and Neymar was left with a simple finish.

Arda Turan scored an overhead kick in the 56th minute to make it 6-0. It came via a Pique flick-on from an Iniesta corner.

Getafe were completely shell-shocked and had nowhere to hide. Luckily for them, Barcelona dropped the pace right down – presumably with one eye on Arsenal. The game ended 6-0.

The result puts the hosts eleven points clear of Atletico Madrid at the summit of La Liga. Real Madrid are a further four points back.

Getafe stay 16th, just one point clear of Granada and the relegation zone.

Next up for Barcelona is the second leg of their Champions League last 16 encounter with Arsenal. They travel to Villarreal next Sunday.