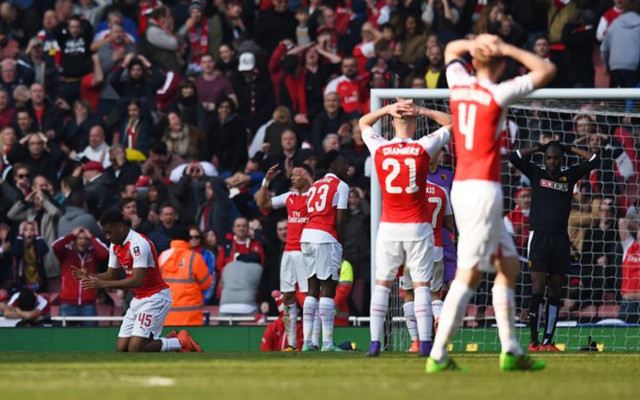 Even with Arsene Wenger playing his best group of attackers, it wasn’t enough for Arsenal to beat Watford in the FA Cup and continue the path to a third title. The Gunners were shocked in a 2-1 defeat, their first loss in the tournament since 2012, and bring fan frustration to an all-time high.

It certainly doesn’t help Arsene Wenger that Arsenal now have the arduous task of going to Camp Nou this week to take on the ungodly Barcelona and their 37-game unbeaten streak in the second leg of the Champions League already in a 0-2 hole.

Needless to say, fans (and Piers Morgan of course) were quick to express outrage at the brutal loss.

1) Whoever plays against Arsenal
2) Neuer
3) Buffon

Arsenal have actually gone backwards. No trophy this season and less points in the league. Wenger!!!

How have @Arsenal not equalised?! Iwobi hits the post and Welbeck somehow fires wide from close range #EmiratesFACup

If I were Arsenal manager, I’d sell half these players. Bunch of lazy, heartless, overpaid prima donnas.
Disgrace to the shirt. #afc

Though there were certainly some built in excuses such as the absence of Petr Cech and Aaron Ramsey among others, fans blamed the loss on trends of failure more than almost anything else.

Being an Arsenal fan is like being cheated by your girlfriend every week.. except you forgive her everytime.. pic.twitter.com/JRieMSHu15

This game summed up what is being an Arsenal fan.

Assuming the somewhat likely event that Arsenal don’t advance in the Champions League, the Gunners’ only path to silverware in the 2015-16 campaign would be the Premier League, in which Arsenal are currently in an 8-point hole below Leicester City.