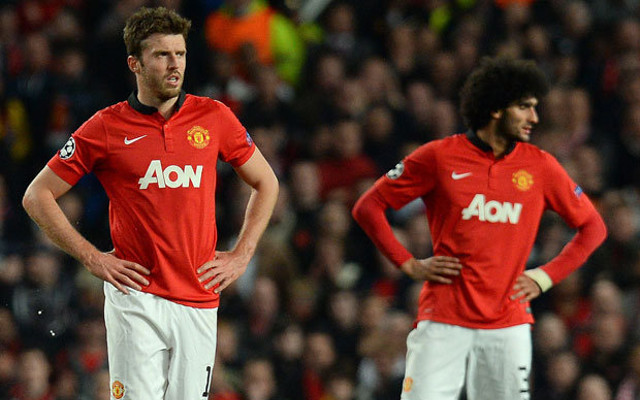 Louis van Gaal has come in for a huge amount of criticism during his time as Manchester United manager, and his decision to play Michael Carrick and Marouane Fellaini as a midfield pivot against Liverpool this Thursday night has once again put him in the line of fire.

Manchester United fans can’t understand the Dutchman’s thinking, and believe it’s clear for everyone to see that playing such a slow midfield pair against the Reds is a huge mistake.

Check out the best of the tweets below:

“Louis, we’re two goals down, we really need to go for it tonight”
LVG: *starts Carrick and Fellaini* #MUFCvLFC

Someone needs to grab LVG, give him a vigorous shake and say you shall not play Carrick and Fellaini ever again

Carrick and Fellaini AGAIN?! LVG on the complete and total windup. Fair play to him.

Instead of Carrick, Fellaini and Lingard
it should of been Schneiderlin, Schweinsteiger and Memphis

Everybody can see it except LvG #Mufc

With a 2-0 deficit carried over from the first leg, Manchester United need goals in the tricky home tie. Fellaini and Carrick don’t exactly scream goals, and it’s easy to see why the fans are so furious.

Defensive stability obviously needs to be considered as well, but with the pace in this Liverpool side Carrick and Fellaini could really struggle. Their shortcomings could become particularly evident as the game goes on, and with Louis van Gaal’s side potentially having to push further up the pitch in search of goals, play will be stretched and the midfield pair will be pushed to the limit.

No doubt these same fans would love to be proved wrong, and if van Gaal is proved right in his team selection he’ll at least have some level of vindication.