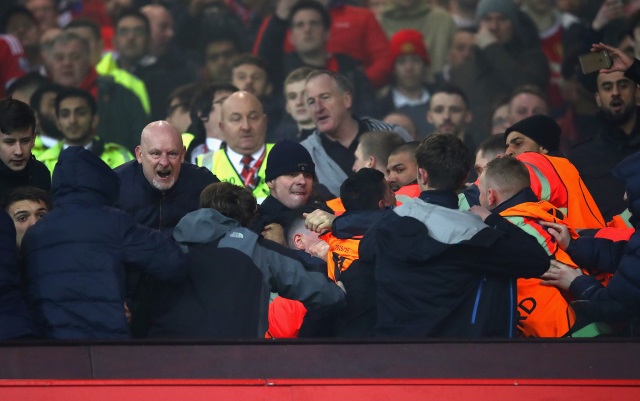 Both Manchester United and Liverpool have been charged by Uefa following scenes of crowd violence during their Europa League round of 16 second leg bout at Old Trafford on Thursday evening.

The exchanging of animosity between these two old rivals began before the game, with a banner positioned on the M 602 motorway in Salford being removed by police after being reported by Liverpool fans, as per BBC Sport.

As the website subsequently revealed, this was followed by scenes of fan violence in the stadium, the lighting of flares, and the throwing of seats by Liverpool fans at their United counterparts. As a consequence, both clubs have been hit with Uefa charges, and the case will be heard in Basel, the day after the Europa League final, in May.

Specifically, according to BBC [as above], both clubs have been charged with ‘throwing of objects’ and ‘crowd disturbances’.

For Liverpool, the news mars a potentially historic victory, after the Reds built on their 2-0 victory in the first leg to draw 1-1 at Old Trafford— after Anthony Martial’s opening penalty was cancelled out by an astonishing Philippe Coutinho effort— to advance in the first continental meeting between the pair.

For United, it is yet another blow in increasingly miserable campaign.