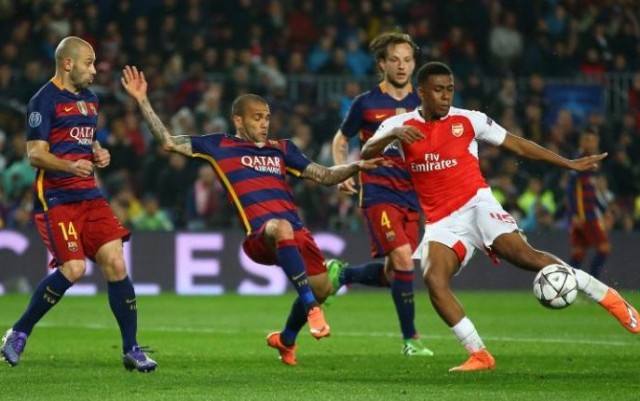 Everton and Arsenal have revealed the teams ahead of their Premier League clash this Saturday afternoon, and there are changes made by both managers. Both teams are badly in need of a win, and this looks set to be a hugely exciting game.

David Ospina continues in goal with no Petr Cech, while the back four is the same as it was against Barcelona. Gabriel Paulista and Laurent Koscielny keep Per Mertesacker on the bench, while Nacho Monreal and Hector Bellerin start out wide.

Mathieu Flamini suffered a hamstring injury against Barcelona (via Arsenal.com), and is consequently unavailable. He’s been replaced by Francis Coquelin, who is partnered in midfield by Mohamed Elneny.

Mesut Özil predictably starts in the No.10 position, with Alexis Sanchez and Alex Iwobi starting either side of him. The teenager is getting his first Premier League start for Arsenal, and will be hoping to replicate the great form he’s been showing recently.

Danny Welbeck continues up front, with Theo Walcott and Olivier Giroud on the bench yet again.

Joel Robles starts in goal for Everton, with Phil Jagielka and Ramiro Funes Mori keeping John Stones out of the side. Seamus Coleman and Leighton Baines start at left and right-back, with a change in midfield. The suspended Gareth Barry is replaced by Muhamed Besic (via IBT), and he’s alongside James McCarthy and Tom Cleverley.

Aaron Lennon and Ross Barkley continue out wide, while the in-form Romelu Lukaku obviously keeps his place up front.

Everton are in fantastic form at the moment, while Arsenal are coming off the back of a disastrous week. Knocked out of the FA Cup and the Champions League, the Premier League is their last chance of silverware – even if their chances are looking pretty slim.

Everton are massively underperforming in the league, with Roberto Martinez’s side sitting in 12th at the moment. They won’t be playing for anything other than pride, but will still pose Arsenal a serious threat.