Ex-Manchester United man Paul Scholes has lashed out at current Red Devils boss Louis van Gaal, criticising him for letting the likes of Danny Welbeck leave Old Trafford, as reported by the BT Sport (via the Metro).

Scholes claims Welbeck would unquestionably be a starter in Manchester United’s current side, and he’s furious with LVG and the Man United board for letting Welbeck and a few other players leave.

“He [Welbeck] would walk into this team, without a shadow of a doubt and he’s just been allowed to go,” Scholes said.

“Every time I watch United I keep thinking of the players that have been allowed to leave the club.

“You’re scratching your head. I think Welbeck is the biggest example of that, he should have never, ever been allowed to leave this club.

“He’s a big example of what Manchester United are, he was here from nine years of age and came right through to the first team. He’s quick, he’s strong, can score a goal, can make a goal, can play left wing, can play right wing.

It’s hard to disagree with him, and while during Sir Alex Ferguson’s reign Welbeck arguably could have been seen as one of the weak links, this current Manchester United team could really use him.

He’s never likely to be a world class striker, and Arsenal fans will admit he has plenty of weaknesses. The England international is a superb squad player though, and as Scholes says he’s incredibly versatile. He’s played regularly on the right-wing and up front for Arsenal, and recently has been enjoying real success as their main striker. He almost changed the game for them when he came on against Watford, and was a real catalyst for their fast start against Everton this past Saturday afternoon.

Even if he was still at Old Trafford, Welbeck would be unlikely to get them out of the funk they’ve been in for so long. With their lack of options up front and out wide though, how could you possibly turn down the versatile 25-year-old? 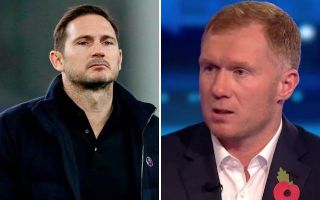