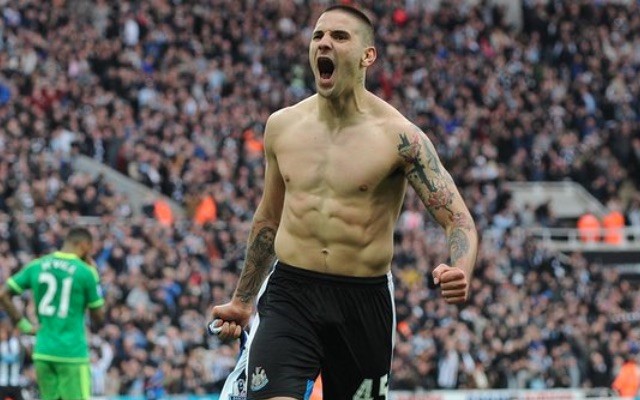 Today’s Tyne-Wear derby at St James’ Park was always going to be a passionate affair as the fierce rivals battled it out for crucial points at the bottom end of the Premier League table.

No player better exemplified that passion than Aleksandar Mitrovic, who embarked on a crazy celebration after cancelling out Jermain Defoe’s opener for Sunderland with Newcastle’s late equaliser.

The Toon Army hailed Mitrovic as their hero after his goal prevented them from suffering a seventh straight defeat to Sunderland, which would have seen them fall four points behind their neighbours.

The summer signing’s passion was highlighted by the Geordie contingent on Twitter as they celebrated the avoidance of a disastrous result – one supporter in particular more heavily than others!

Pleased for Mitrovic. While others coast, he – at very least – cares. #nufcvsafc

Have to admire the passion of Mitrovic, even if he is a bit mental #nufcvsafc #SuperSunday — Rob Shiers (@RobShiers) March 20, 2016

Here’s to you Mitrovic you beautiful berk #NUFC pic.twitter.com/mSsezlvrad

#nufcvsafc Mitrovic is a G. What we wanna see more of players. Except the bookings obv. But he’s got heart — Tuoyo B Memuduaghan (@Tuoyo90) March 20, 2016

But the neutrals weren’t as impressed with the Serbian striker, who protested his late substitution despite appear to be concussed, or the “utter shite” standard of the North-East duo!

The result, combined with Norwich City’s win at West Bromwich Albion yesterday, leaves both teams in the relegation zone and facing the prospect of playing this fixture in the Championship next season.

There’s nothing tough about trying to play on after being knocked out Mitrovic #nufcvsafc — Patrick Treanor (@paddyt007) March 20, 2016

Crap result for both teams, but a fair one,2 utter shite teams trying to stay in a league that’s honestly above them. #nufcvsafc — David Horsefield (@davidhorsefield) March 20, 2016

A draw is a fair result, but it won’t help either Newcastle or Sunderland much. Both staring down relegation. #NUFCvSAFC #BPLonNBC