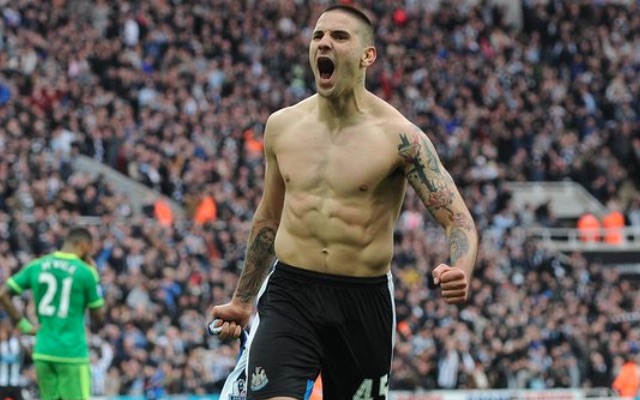 Newcastle United striker Aleksandar Mitrovic scored a crucial goal for his side on Sunday by grabbing the equaliser in their 1-1 draw with rivals Sunderland.

After Jermain Defoe had given the visitors the lead at St James’ Park just before half-time, it looked bleak for Rafa Benitez’s men as they looked set for a huge blow to their ambitions of avoiding relegation.

However, they were able to find a goal to cancel out Sunderland’s effort, with Mitrovic proving to be the hero for his side with his late equaliser.

The entertainment didn’t stop after the goal had gone in though, as with emotions high and with security lacking, a Newcastle supporter had made his way onto the pitch and began running towards Mitrovic to celebrate with him.

Unfortunately for the supporter in question, he slipped at the crucial moment which forced the Serbian striker to improvise and avoid suffering a bizarre injury. While he was able to escape unscathed, it didn’t prevent the cameras picking up an hilarious sequence of events.

It didn’t look as though the concerned parties were too embarrassed though, as in the bigger picture it could yet prove to be a pivotal goal in Newcastle’s season as they sit three points adrift of safety but with a game in hand on 17th-placed Norwich City.