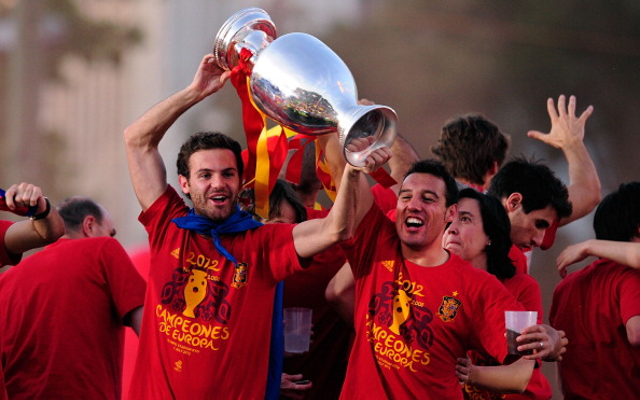 Manchester United duo David De Gea and Juan Mata, and Chelsea full-back Cesar Azpilicueta have revealed their views on whether Spain can win the European Championships this summer.

La Roja have enjoyed immense success over the last decade, and while they flopped at the 2014 World Cup—falling at the first hurdle—they won both Euro 2008 and Euro 2012, as well as the 2010 World Cup—winning the first-ever Mundial in the country’s history.

Spain have already retained their European title, but no team in the competition’s history has ever won the continental crown three times in a row.

Vicente Del Bosque’s side will look to refine their tournament preparations on Sunday when Spain meet fellow qualifiers Romania in a friendly.

Speaking to the FRF TV [as per the Romanian Football Federation’s official website], Premier League trio De Gea, Mata and Azpilicueta have expressed differing views on the national side’s chances of winning the tournament this summer.

“Nobody had ever achieved winning two European Championships and a World Cup before,” Azpilicueta began. “We are still champions, and will give everything to win a third successive crown.”

“No team has ever won it three times in a row,” echoed De Gea. “It’s a difficult challenge, but we want to win it again.”

Mata, however, was more optimistic about La Roja’s chances.

“In a Euros or a World Cup, you at least need a good team, and I think we have that,” the player began. “You need a bit of luck as well,” he concluded.