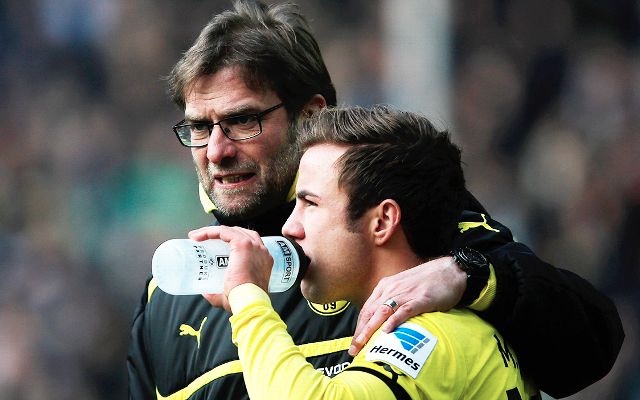 Bayern Munich are concerned that Mario Gotze has his heart set on reuniting with former manager Jurgen Klopp at Liverpool this summer, according to The Mirror.

Germany’s 2014 World Cup hero has fallen out of favour under Pep Guardiola, making only five starts in the Bundesliga this season, and fancies a fresh start, The Mirror reports.

Carlo Ancelotti’s arrival at the Allianz Arena, as a replacement for Manchester City-bound Guardiola, would give Gotze the opportunity to do that while still at Bayern.

But The Mirror understands that Gotze could be keen to join Klopp at Liverpool and play for the man who extracted his best form while together at Borussia Dortmund.

Klopp would surely jump at the chance to sign the 23-year-old, who scored 31 goals and supplied 44 assists in 116 games for Dortmund, but might have to pay big money.

The Mirror claims that Bayern would want to recoup most of the £30m that they paid for Gotze in 2013, despite the winger being about to enter the last 12 months of his contract.