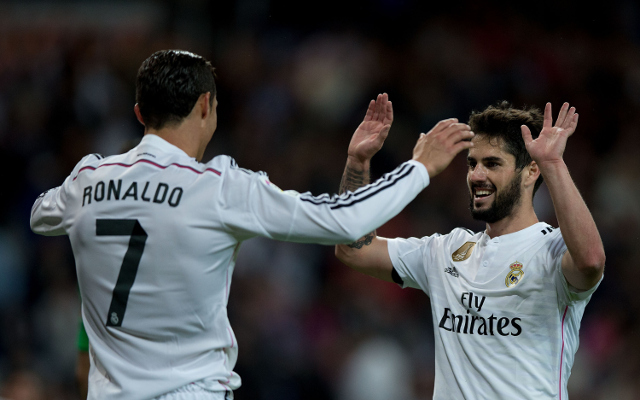 Real Madrid playmaker Isco has indicated that he’s not intimidated by the prospect of meeting rampant Barcelona in the Clasico this weekend.

The attacking midfielder, who is currently on international duty with Spain, was asked by radio station Cadena Cope for his thoughts ahead of Saturday’s showdown.

“It’s a game that everyone wants to play in,” Isco began. “Barcelona are fine, but we are Real Madrid,” he continued, not flinching at the prospect of going head to head with one of the most outstanding sides in the history of the world game.

Barcelona currently sit nine points clear in the Spanish table, having picked up 76 points from their opening 30 matches.

While they dropped points in a 2-2 draw with Villarreal—a result which ended their fine winning streak—they extended their advantage over Atletico Madrid, who fell to a 2-1 defeat at Sporting Gijon.

Real Madrid are down in third, a whopping 10 points off Barca.

While Los Merengues’ chances of overhauling their arch rivals are slim, with the Champions League title a more realistic prospect, Zinedine Zidane and his side will be aware of the need to demonstrate their improvement against Barcelona, following a crushing 4-0 defeat earlier in the season.