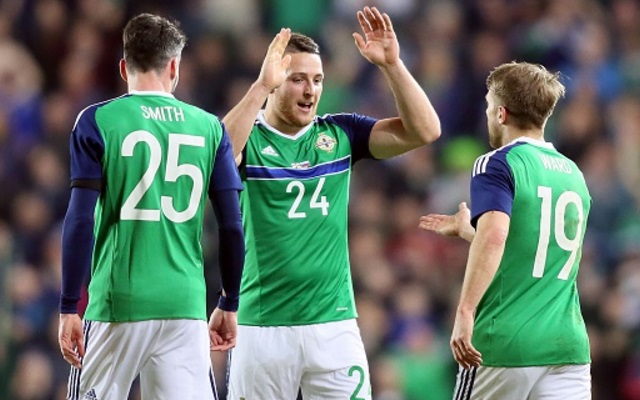 Conor Washington scored his first goal for Northern Ireland and boosted his chances of making Michael O’Neill’s selection for Euro 2016 as he helped the minnows see off Slovenia.

Roy Carroll saved Milivoje Novakovic’s second-half penalty to ensure that the Irish picked up a morale-boosting victory ahead of their tournament showing in France next summer.

Washington only made his debut for Northern Ireland against Wales in a 1-1 draw last week, and his effort helped the Green and White Army break their own record unbeaten streak.

O’Neill’s side have now gone 10 matches without a loss, ending the record set by Billy Bingham’s side in 1986, and giving another reason for optimism ahead of the European Championships.

Slovenia started strongly, and Washington almost opened the scoring inside the first half hour, only for Jan Oblak to pull off an outstanding save.

The Queens Park Rangers forward made them pay for their profligacy before the half-time whistle, when he demonstrated his upper-body strength to evade the attentions of two defenders, before finishing beneath the crossbar.

The visitors to Windsor Park had a superb opportunity to equalise in the second half when Jonny Evans was adjudged to have brought down Miral Samardzic in the box.

The experienced Novakovic stepped up to level the scores, only for Roy Carroll to block his penalty and ensure O’Neill’s troops pick up an impressive friendly triumph and ensuring history for this groundbreaking squad.