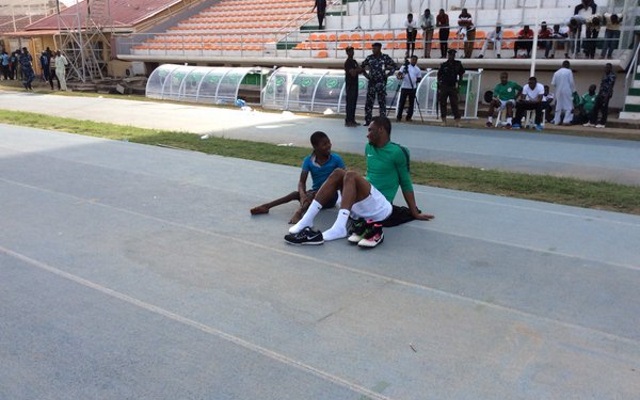 Footage has emerged which shows Nigeria skipper John Obi Mikel chatting with a disabled supporter on the touchline of the Ahmadu Bello Stadium in Kaduna.

The 30-minute clip, showed Chelsea midfielder Mikel in conversation with fan Abubakar Haruna Gurugu, who was acknowledged on the Nigeria national team’s official Twitter handle as a ‘special fan’ of the national side.

Meet Abubakar Gurugu, a special fan of the team in Kaduna. pic.twitter.com/Mu3XcP75cW

Gurugu—who had polio as a child, according to Goal—was less than impressed with Nigeria’s 1-1 draw against Egypt last week.

The Super Eagles took the lead through midfielder Etebo Oghenekaro on the hour mark, but Egypt equalised through AS Roma’s on-loan Chelsea forward Mohamed Salah in the first minute of stoppage time.

Salah could have won it at the death, only for the referee to blow the final whistle as the North African bore down on goal.

Speaking to Goal [as above] after the match, 15-year-old fan Gurugu expressed his displeasure with the result.

“I wasn’t happy about the draw,” the young fan began. “How can Egypt draw [with] Nigeria in Kaduna!?”

According to the source, Mikel offered to help the fan after their conversation, while Watford striker Odion Ighalo is also understood to have asked for the youngster’s guardian’s contact number.