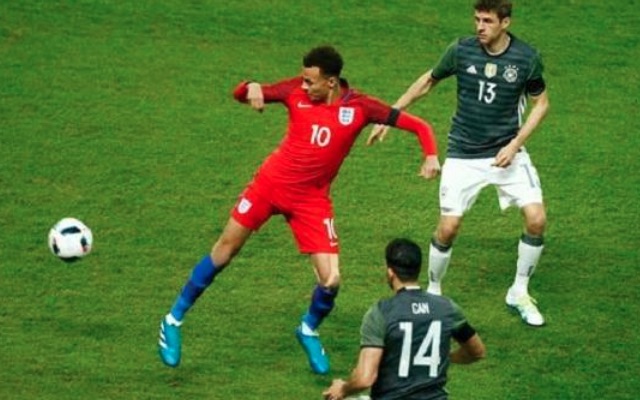 Dele Alli basically made Emre Can his b**** during England’s 3-2 victory over Germany on Saturday.

And then he, quite literally, kicked Can while he was down by poking the ball at the floored Reds star, who had just been fouled by Alli’s Spurs pal Eric Dier – the scorer of England’s stoppage-time winner.

We do not have any video evidence of this further humiliation of Can, but former England captain Bryan Robson noticed Alli’s cheap shot, and wouldn’t have let him get away with it.

Robson is quoted by the Daily Mail as saying: “If I was playing against Alli I’d want to smash him. He’s got that cheeky edge where he throws the ball away when you want to pick it up or kicks it a few yards away like when he hit the ball at Emre Can after Eric Dier had fouled him.

“It’s part of the game. It antagonises the opposition, gets under their skin. You have to take the game to the white line but don’t step over it. The idiots lose it and get sent off.”

Can might take Robson’s advice and “smash him” when Liverpool host Tottenham at Anfield in the Premier League on Saturday. Alli might need to have eyes in the back of his head.