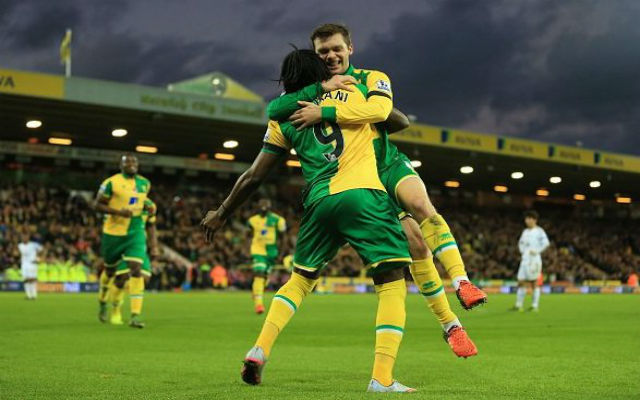 Norwich beat Newcastle 3-2 on Saturday afternoon as they took a massive step towards their own Premier League survival. Newcastle are now on the brink.

Timm Klose headed Norwich into a first half lead. Newcastle eventually got level through substitute Aleksandar Mitrovic, but three minutes later Mbokani powered home to put the hosts ahead again. Mitrovic thought he’s salvaged a point with an 86th minute penalty, but Jonas Olsson dramatically won it for Norwich in the 93rd minute.

Norwich opted to make three changes from the victory over West Brom two weeks ago, as Andre Wisdom, Ryan Bennett, and Steven Naismith all came into the starting eleven.

The most exciting thing to happen in the opening 15 minutes was referee Mike Dean being forced to half play after a beach ball was thrown onto the pitch from behind the Newcastle goal.

The game eventually spluttered into life in the 18th minute as Dieumerci Mbokani had a goal disallowed for Norwich. Jonny Howson made a great run down the right flank and swung in a perfect cross for the striker to tap home, but the linesman raised his flag. Replays showed it was the correct decision.

Norwich continued to have the better chances and Darlow made a couple of reflex saves to keep the score at 0-0.

It was clear the first goal was coming, and it eventually arrived in added time at the end of the first half. Robbie Brady swung in an inch-perfect cross from out wide and Swiss international Timm Klose rose highest to power home a header.

Seven minutes after the restart, Cisse missed a great chance. Andros Townsend drove in from the wing and hit a smart shot which John Ruddy could only parry back into the path of the Senegal international, but he managed to fire horribly wide from less than four yards out.

Benitez chose to introduce derby hero Aleksandar Mitrovic with half an hour to go, and nine minutes later he had found the equaliser. Andros Townsend was the provider, as his cross gave the Serbian a simple header from eight yards.

Unfortunately for the Magpies the score didn’t last long, as Mbokani restored Norwich’s advantage three minutes later when he smashed into the top corner from the edge of the area.

To their credit, Newcastle refused to lie down. They got their reward when Mitrovic scored his second from the penalty spot with four minutes to go. Gary O’Neil handled and the 21-year-old took the responsibility, making no mistake.

There was still time for late drama, as Norwich won the match in the 93rd minute. Jonas Olsson hit an accurate shot into the bottom corner after Newcastle couldn’t clear their lines. Newcastle slumped to the floor, Benitez looked furious, and their travelling fans looked broken.

The result leaves Norwich six points ahead of Newcastle in the relegation battle. The Geordies look increasingly likely to spend next season in the Championship.

Norwich go to Palace next weekend then host Sunderland the weekend after; they are a pair of games that will go a long way to deciding their fate come the end of the season.

Newcastle are at Southampton next weekend then have consecutive home games against Swansea and Man City. 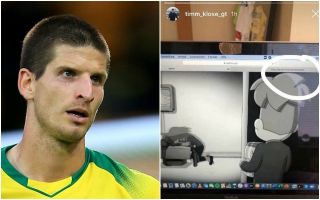