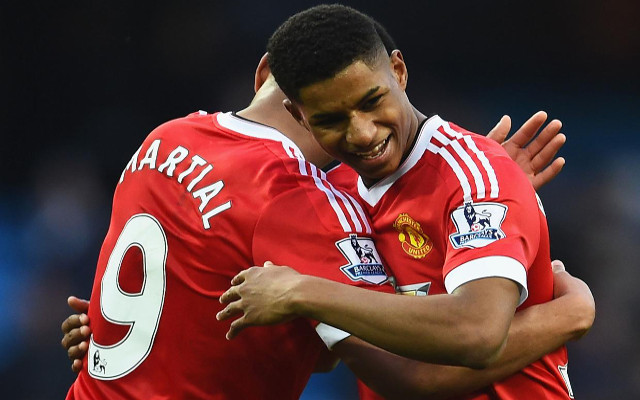 Manchester City‘s thumping 4-0 victory over Bournemouth on Saturday has placed the onus back on Manchester United to defeat Everton at Old Trafford and keep the pace with their rivals.

Following Saturday’s matches, City hold the fourth spot—and the final Champions League qualifying berth—while West Ham United’s own hopes were dented as they were held 1-1 at home by Crystal Palace.

The Hammers remain in fifth on 51 points, four behind City.

United are in sixth on 50 points, and will be desperate to keep the pressure on their fierce local rivals with a victory over Roberto Martinez’s Everton, who are sitting down in 12th, having lost three of their final four matches.

United are without several key players, and Louis van Gaal will have to exploit the full dimensions of his squad in order to secure the three points.

With Wayne Rooney still absent, Marcus Rashford will lead the line, and will likely be supported by youthful duo Anthony Martial and Jesse Lingard, as well as Spanish schemer Juan Mata.

With Ander Herrera and Bastian Schweinsteiger both absent, Morgan Schneiderlin and Michael Carrick will likely be paired together in the heart of the park.

David De Gea continues in goal, although expect Daley Blind to step into the heart of the defence alongside Chris Smalling, with Phil Jones lacking match fitness [according to The Guardian].

We’re tipping Uruguayan wideman Guillermo Varela to continue at right-back, with Marcos Rojo—fresh from a colourful international break—on the left.