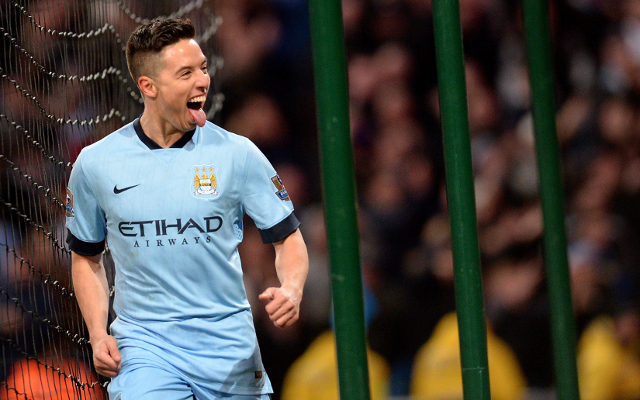 Samir Nasri has insisted that Paris Saint-Germain would struggle to be successful in the Premier League as its completely different to Ligue 1.

The French champions have already sealed their domestic league title as they continue to boast a 25-point lead over their nearest rivals with six games remaining in the campaign.

In turn, their focus will now be on the Champions League, where they face Manchester City in Paris in the first leg of their quarter-final clash on Wednesday night.

Nasri has risked stoking the flames by offering a seemingly unnecessary critique of their achievements, and it may well be something that Laurent Blanc and his players use to their advantage when the two sides face off.

“It’s true they have a big team, but I do not think they are above the others in England,” he told L’Equipe.

“There are no easy games in England, not one. I’d like to see Paris play a Monday night at Stoke, West Ham or at the Emirates against Arsenal.

“Today, the big four is no more. There are six or seven teams who can be champions. It’s harder. But this is Paris, not Barca.”

Former Aston Villa and Liverpool manager Gerard Houllier disagreed with Nasri’s assessment, insisting that the strength of their squad would see them win the Premier League if they were involved, as reported by Sky Sports.

The French tactician went on to argue that the likes of Thiago Silva and David Luiz would not be afraid of playing in England and are great players who are capable of playing anywhere.

It is difficult to disagree with Houllier, as although the Premier League is certainly more competitive and there is better quality across the board compared to the French top flight, this current PSG squad is one of the strongest in Europe.

With countless internationals with experience of playing all over Europe, coupled with their ability to compete against the likes of Chelsea and Man City in the Champions League, they have enough to suggest that they certainly would be involved in the title race at the very least.

Naturally, all these hypothetical scenarios are pointless, but Nasri would arguably have been well advised not to have made his comments on the eve of a crucial game for his club with PSG needing no further edge or motivation to progress in the Champions League at City’s expense.