Last season John Terry was one of six Chelsea players to make the PFA Team of the Year – alongside Branislav Ivanovic, Gary Cahill, Nemanja Matic, Diego Costa and Eden Hazard, who was named Player of the Year.

One thing’s for sure – Chelsea will not be so well-represented in this season’s awards, because the Blues, who were runaway champions in 2014-15, are languishing in 10th position with seven games left to play.

With Leicester City top of the table, it should probably come as no surprise that Terry has opted to select seven men from the Foxes in his dream team, which he revealed on Instagram. 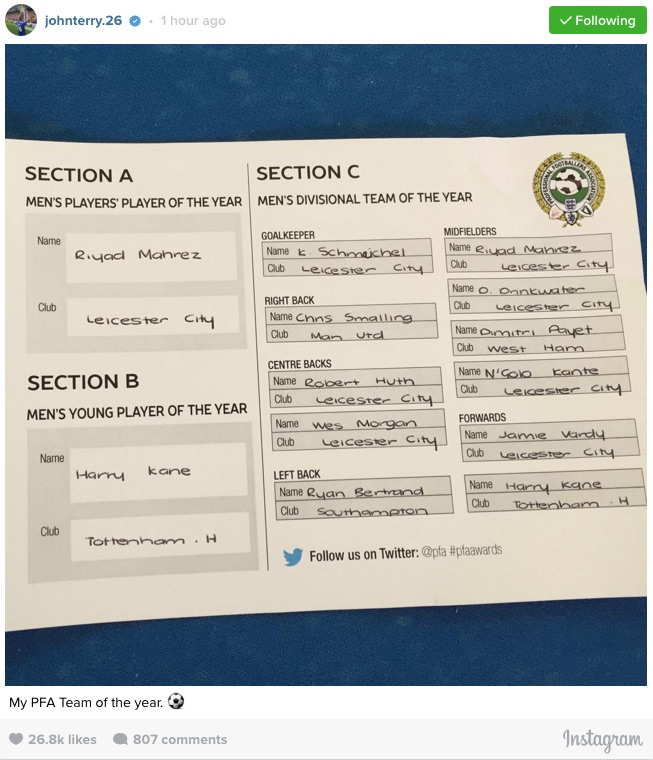 SEE ALSO: Premier League woodwork stats: How table would look if near-misses had gone in

However, his decision to omit Mesut Ozil, who has provided 18 assists and five goals for Arsenal, is unlikely to impress Gunners fans.

Meanwhile, Spurs supporters may question Terry’s decision to ignore the likes of Toby Alderweireld, Eric Dier and Dele Alli, although Harry Kane does get in up front.

In fact, Kane gets Terry’s vote for the Young Player of the Year award, while the Chelsea skipper has chosen Leicester playmaker Riyad Mahrez for the main gong.

Arguably, the most interesting of Terry’s picks is shifting Chris Smalling to right-back. The Manchester United defender is a centre-half by trade.

John Terry picking Chris Smalling at RB could be a hint to Hodgson. "Move him out wide, partner me and Cahill, then I'll play at the Euros!"