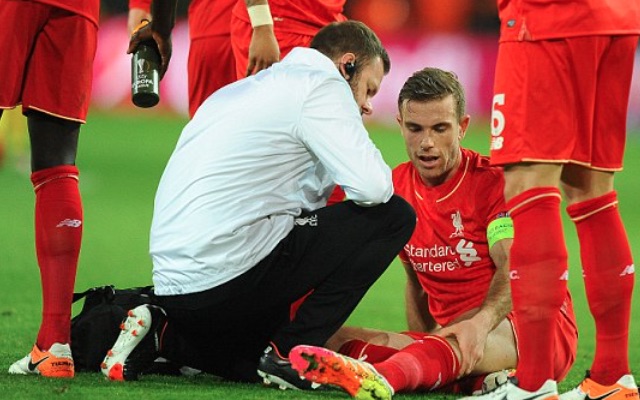 Jordan Henderson is a major doubt for England’s Euro 2016 campaign after Liverpool FC confirmed on their official website that he will miss the remainder of the season.

The Reds captain was a casualty of Thursday’s 1-1 Europa League draw with Borussia Dortmund, and has been diagnosed with a knee ligament injury by Liverpool’s medical team.

Liverpool note on their website that lateral collateral ligament damage often results in a three-month layoff, but scans show that the damage to Henderson’s knee is isolated.

That could reduce the 25-year-old’s recovery time to six to eight weeks, with England’s Euro 2016 squad to be named on May 12, and their opening game versus Russia on June 11.

The good news for Henderson, who has accumulated 23 international caps since his debut in 2010, is that he will not require surgery, according to Liverpool’s official website.

But the timescale on his return means that the midfielder is unlikely to be able to prove his fitness to Three Lions boss Roy Hodgson before England depart for France next month.

Henderson had been expected to feature prominently for England this summer, with his midfield industry complementing the adventure of the likes of Dele Alli and Ross Barkley.

He will also be a big loss to Liverpool as they aim for Europa League glory. Divock Origi’s away goal in Dortmund has put the Reds in a good position for their quarter-final second leg.