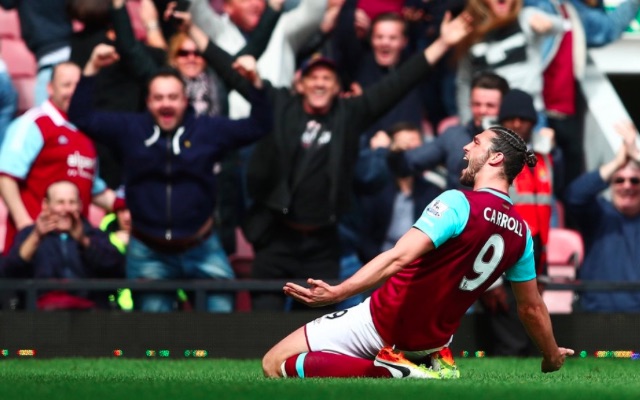 It was one man against boys as Andy Carroll exposed Arsenal’s soft under-belly to inspire a remarkable West Ham United comeback with a quick-fire hat-trick at Upton Park today.

The Hammers had fallen 2-0 behind to a couple of typically aesthetic Arsenal goals, but the Gunners did not have the substance to back up their style when they were defensively tested.

A rapid double in the closing minutes of the first half brought the hosts level at 2-2 by the break. Arsenal simply did not have an answer to Carroll’s physical dominance of the penalty box.

His first goal was a powerful header from Aaron Cresswell’s wonderful cross. The Gunners defence allowed Carroll to get a free run at the ball, and then could not compete with him in the air.

The former Newcastle United striker’s second proved that he is more than a battering ram – a skilful overhead kick after a pair of weak Gabriel Paulista challenges, as the above video shows.

And his hat-trick, and an awful Arsenal collapse, was completed seven minutes into the second half courtesy of another towering header. The visitors clearly had not learned their lesson!

Michail Antonio barged past Nacho Monreal and stood up a cross for Carroll, who had isolated himself against diminutive full-back Hector Bellerin at the back post, to nod beyond David Ospina.

Carroll is almost unstoppable on his day, but this type of soft defending is indicative of why Arsenal – 10 points adrift of leaders Leicester City after this 3-3 draw – will not win the Premier League title.