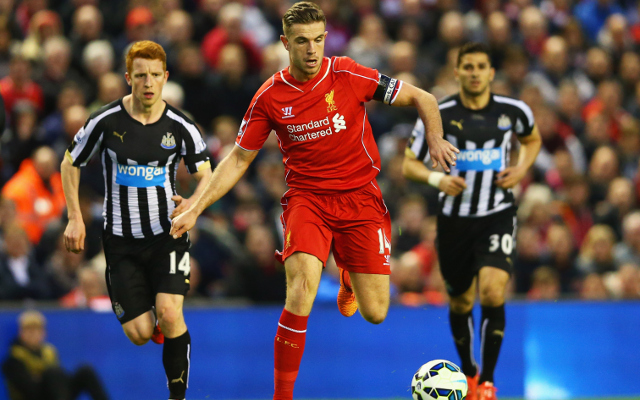 Liverpool skipper Jordan Henderson will miss the remainder of the season after sustaining knee ligament damage in their 1-1 draw with Borussia Dortmund.

The England midfielder is also a Euro 2016 doubt after being diagnosed with lateral collateral ligament damage which could sideline him for between six and eight weeks.

Reds supporters may argue that Henderson has not been as effective this term as he manages a heel injury which cost him three months of the season prior to Christmas.

But these stats from WhoScored show just how crucial the 25-year-old, who has inherited the captaincy from Steven Gerrard, is to Liverpool’s Premier League fortunes.

Liverpool: With & without Jordan Henderson in the PL this season https://t.co/AEByqgKSzo #LFC pic.twitter.com/cUbWq6JNzG

As you can see, Henderson’s presence makes a huge difference to Liverpool’s results this season. They have won twice as many games with him than they have without him.

And this is a very fair sample size, with the former Sunderland youngster having played in exactly half of Liverpool’s 30 Premier League games so far in the 2015-16 campaign.

Jurgen Klopp’s side average 1.13 points per game without Henderson – a record which would have them 16th in the Premier League table if it was spread across their 30 games.

When Henderson does play, Liverpool average 1.87 points per game. That is better than every team in the division other than the top two – Tottenham Hotspur and Leicester City.

The Anfield club score more goals, concede fewer and win plenty more points with Henderson in the team, and his absence is sure to be felt between now and the season’s end.

The likes of Philippe Coutinho might take most of the plaudits, but Henderson’s impact on Liverpool cannot be disputed. Perhaps he is quietly filling Gerrard’s shoes after all.