There would have been a time, not so long ago, when Sir Alex Ferguson was reigning supreme, that no Tottenham Hotspur player would have gotten into the Manchester United side.

The times are changing, and now, ahead of welcoming the Red Devils to White Hart Lane this afternoon, Spurs arguably have one of the most enviable squads in the Premier League.

Here, CaughtOffside has picked a combined XI of the best Tottenham and United talents – and it is Mauricio Pochettino’s title chasers who dominate. Oh, how the mighty have fallen…

De Gea and Hugo Lloris are two of the Premier League’s top stoppers, but the United man has the edge. There is a case to be made that the Spaniard is now the best goalkeeper in the world.

Right-back has been a problem area for United and Tottenham have two very good ones. Walker has held off the challenge of Kieran Tripper and enjoyed a very good and largely gaffe-free season.

The Belgian has been the best centre-back in the Premier League this campaign. He has transformed Tottenham from one of the easiest teams to score against to the toughest defence in the division.

Smalling might be second to Alderweireld in this season’s Premier League centre-back rankings. The England international has come on leaps and bounds and is now the leader of United’s defence.

Luke Shaw’s injury means he is ineligible for selection, so Rose gets the nod at left-back. The Spurs man has actually benefitted from Shaw’s broken leg to potentially nail down a starting spot at Euro 2016.

Pochettino’s decision to move Dier into midfield has been an inspired one. Michael Carrick has been a fine defensive midfielder over the years, but Tottenham’s 21-year-old is England’s future in this role.

Louis van Gaal would kill for a box-to-box midfielder like Dembele. Although he should score more goals, the Belgian brute has a combination of physicality and skill that none of United’s midfielders possess.

This was a very tight call between Eriksen and Juan Mata. The United playmaker has been a consistent performer for years, but Tottenham’s Dane is enjoying a better season with six goals and nine assists.

According to the Daily Mail, former Manchester United manager Sir Alex Ferguson has described Alli as the best young English midfielder since Paul Gascoigne. United fans would love to have the 19-year-old.

Tottenham have a crop of very exciting youngsters making an impact, but Martial is every bit as good. He has been a revelation for United, albeit a costly one, with his pace and direct running down the left.

As the Daily Mail reports, Van Gaal claimed this week that Wayne Rooney is England’s best striker. Not a chance! Kane is the top scorer in the Premier League with 22 goals and a complete number nine. 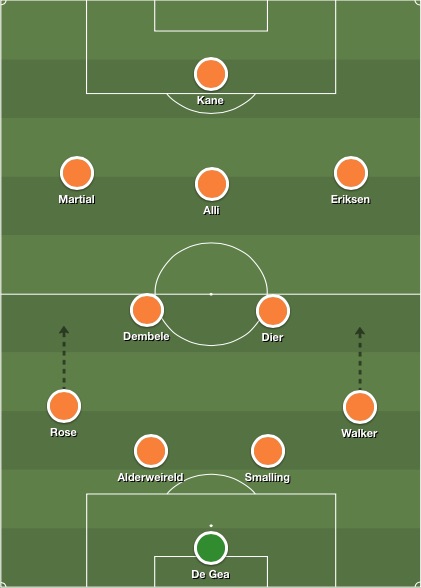