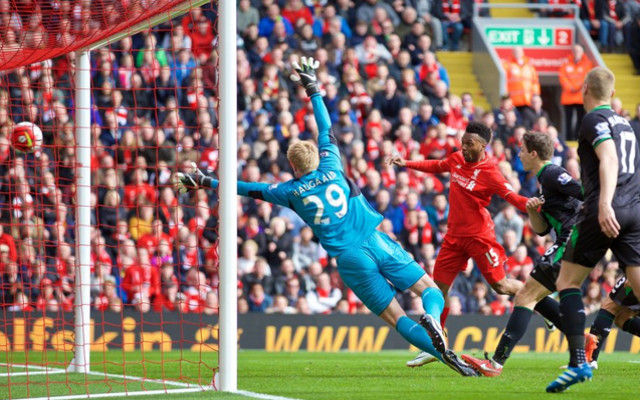 Injury bug? What injury bug? Right now the only thing Daniel Sturridge is susceptible to is getting into the perfect position to score a goal. And he did exactly that in a crucial point of Liverpool’s bout with Stoke City ahead of their second leg in the Europa League against Borussia Dortmund.

Despite an early goal from Alberto Moreno, Stoke City soon equalized thanks to a header from Bojan Krkic. But the Potters ace finished the half with only the second-best header of the match.

Interestingly enough, it was the seldom-used Sheyi Ojo – getting a rare start – who delivered a superb cross to the box, where Daniel Sturridge was waiting to smash the ball with his noggin and into the goal.

The goal gave Liverpool a 2-1 lead heading into the half and the third Premier League goal for the injury-prone Sturridge since Klopp took over in October.

The English striker has been working tirelessly to shed the stigma of being injury prone and he has done a superb job across all competitions this year.