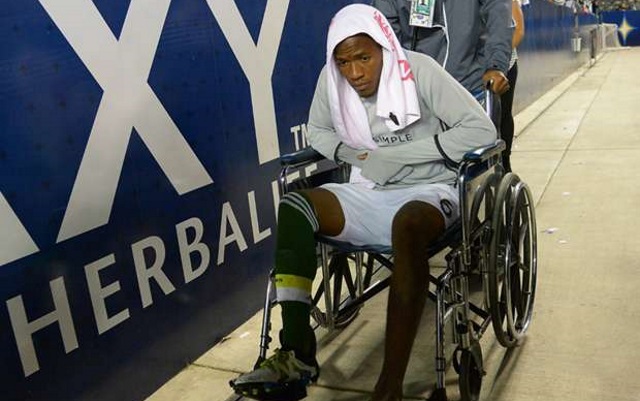 Repeat offender Nigel de Jong has committed arguably his worst-ever foul…and it’s ended up putting his opponent in a wheelchair.

The Dutch midfielder moved to Los Angeles Galaxy at the beginning of February, and it hasn’t taken too long for Major League Soccer audiences to get very familiar with the ex-Manchester City man’s bad boy reputation.

A horror tackle from de Jong left Portland Timbers midfielder and United States international Darlington Nagbe in a wheelchair during an MLS showing on Sunday.

How many games do you guys think @mls is going to suspend #DeJong for this? #lagalaxy #mls #badrefs #yellowcard? pic.twitter.com/0kZ6drUWGs

The midfielder was understood to have been left with an ankle injury, and while de Jong escaped with just a yellow card, it’s hard to see the pitbull escaping further punishment from the league’s authorities.

Speaking after the match, de Jong insisted that he didn’t mean to injury Nagbe.

“In a game like this, it’s never the intention to hurt anybody, as well with my foul. I apologize to the kid, I mean, he’s a great kid. But it was never my intention to foul him,” the tenacious operator told LA Galaxy’s official site.

“I just [caught] up with him and said that it was my never my intention, it was a 50-50 and I went over the ball instead of on the ball,” the midfielder concluded.

De Jong was guilty of a similarly violent challenge on Xabi Alonso during the 2010 World Cup final, while he also broke Hatem Ben Arfa’s leg with a horror tackle in Premier League action during his City days.

The midfielder has also featured for Ajax, Hamburg and AC Milan.