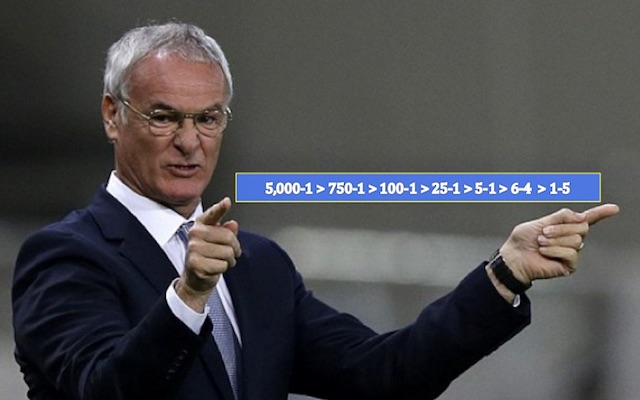 So much has been written about those psychic few who had the foresight to bet on Leicester City winning the Premier League this season.

As we all seem to know by now, Claudio Ranieri’s men were 5,000-1 before a ball had been kicked. And they stayed at that meaty price despite their 4-2 win over Sunderland on the opening day.

However, a 2-1 victory at West Ham seven days later resulted in Ladbrokes halving their odds to 2,500-1.

They stayed at 2,500-1 as they took eight points from their next four matches, but – strangely – their next price cut came after their first defeat, a 5-2 home loss to Arsenal.

Leicester’s odds remained in excess of 1,000s until Halloween, when second-half goals from Riyad Mahrez and Jamie Vardy saw them come from behind to beat West Bromwich Albion.

Although their odds continued to be cut, Leicester maintained their underdog status until February 6 – the day they won at Manchester City to become title favourites.

They are now heavily odds-on at 1-5, but be warned…

The below tables show Leicester’s changing Ladbrokes odds throughout the season, as well as the probabilities those odds represent. At the start of the season, they were given a 0.02% chance!