Manchester United’s last hopes of saving their season with trophy could be over tonight if they lose their FA Cup quarter-final replay to West Ham United at Upton Park.

And they surely will do if they play as badly as they did in Sunday’s 3-0 defeat to Tottenham Hotspur at White Hart Lane. Perhaps then will Louis van Gaal consider changes?

Here, CaughtOffside suggests the lineup that the Red Devils should go with at the Boleyn Ground, with a contingency plan put in place to combat the threat of Andy Carroll.

The United goalkeeper could perhaps consider himself unfortunate not to be shortlisted for the PFA Player of the Year award. Beaten by a free-kick from the nominated Dimitri Payet at Old Trafford.

With Timothy Fosu-Mensah having limped off against Spurs to join fellow promising youngster Guillermo Varela on the sidelines, Ecuadorian Valencia should make his first start since August.

Smalling has developed into a defensive leader for the Red Devils and must organise his back four to try to limit the Andy Carroll threat. Arsenal could not handle the towering striker on Saturday.

The Dutchman is a very tidy footballer, but Carroll will think that he can dominate Blind in the air. United must try to ensure that the West Ham target man does not isolate him in the penalty area.

Marcos Rojo has been a weak link for United since returning from injury. Darmian has not been too consistent himself, but other absentees mean that the Italian is Van Gaal’s best option here.

Thirty-four-year-old Michael Carrick rarely plays two games in a week at this stage in his career, so Schneiderlin will surely play, and needs to be at his energetic best against a physical Hammers midfield.

With Carrick or the injured Bastian Schweinsteiger unlikely to start, Fellaini should get his chance. The Belgian has his flaws, but would at least help reduce the aerial threat of Carroll from set pieces.

The Spanish playmaker is the only member of this United side to have won the FA Cup, in 2011-12 with Chelsea. It is hard to believe that the Red Devils have gone since 2004 without lifting the trophy.

Jesse Lingard has not been as influential in recent matches, and Van Gaal could do with some more industry in the middle of the park at Upton Park. Herrera provides that, as well as a goal threat.

The Frenchman gave makeshift right-back Michail Antonio a really difficult time in the 1-1 draw at Old Trafford, and United will probably look to exploit that weakness in West Ham again this evening.

His confidence might be hit after being harshly hooked at half time against Tottenham when there were much worse performers, but Rashford has the pace and work rate to trouble West Ham’s defence. 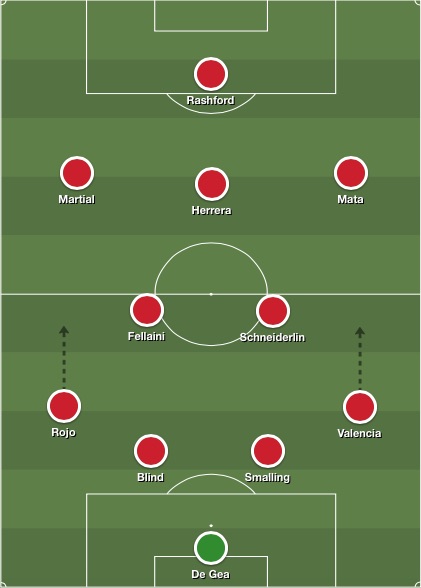