TalkSPORT pundit Stan Collymore has shared a private exchange with Aston Villa captain Joleon Lescott on Twitter, exposing the defender as a fraud.

The Villains ended their near-three decade stay in the top flight on Saturday when their inevitable relegation was confirmed with a 1-0 defeat at Manchester United.

After the match, Lescott—who has previously provoked the ire of the Villa supporters with some ill-judged actions this season—admitted that the Birmingham heavyweights’ final capitulation was a ‘weight off the shoulders’.

Lescott: “Now confirmed maybe it’s a weight off the shoulders and we can give these fans what they deserve, some performances.” #avfc

Collymore, who is a Villa old boy and previously represented the club, was clearly incensed by Lescott’s show of disrespect. Taking to Twitter after the comment was made, Collymore described Lescott with one simple word, calling the centre-back a ‘tit’.

Word clearly got back to the defender, who sent a private message to the pundit in order to try to diffuse the situation. 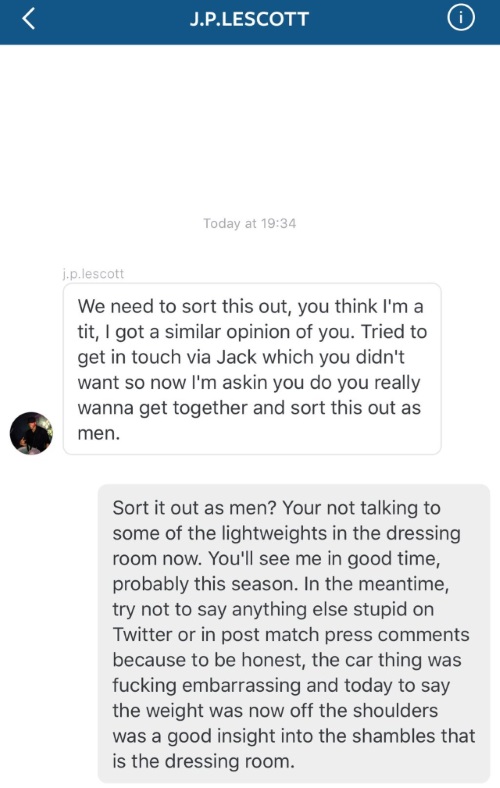 Collymore, clearly not impressed with Lescott’s admission, shot down the England international with an acerbic response, before sharing the conversation on social media.

While Collymore’s act perhaps wasn’t the classiest thing to do, the ex-Liverpool frontman had a convenient response…one that Lescott knows only too well.

Sorry, didn’t mean to send that.

Phone was in my pocket.