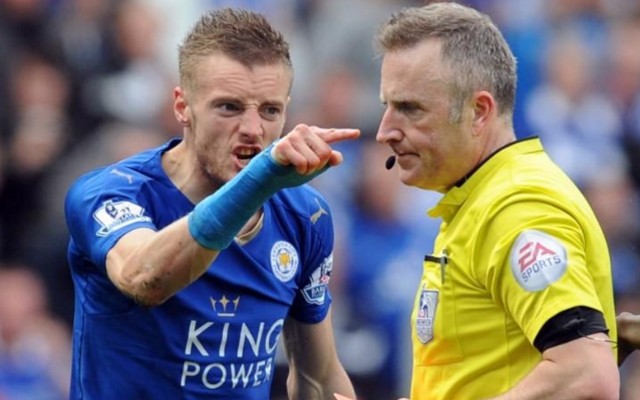 There is only one topic of discussion at water fountains, or water coolers to our American cousins, in offices across the country this morning – did Jamie Vardy dive or not?

Well, Dermot Gallagher, who officiated in the Premier League for 15 years, is convinced that he DID! He told Sky Sports that he has no doubt that Vardy, who was shown a second yellow card for his act of simulation, was trying to con referee Jonathan Moss into giving a penalty.

And I for one agree. Vardy deliberately entangles his legs in Angelo Ogbonna’s, in an attempt to fool Mr. Moss into awarding Leicester City another spot kick. The England striker will now be suspended for Swansea City’s visit next weekend as the Foxes try to close in on the title.

Mr. Moss has been widely criticised for his performance in the 2-2 draw with West Ham United at the King Power Stadium, but he has our support, and, more importantly, that of a hugely experienced Premier League referee in Gallagher when it comes to the Vardy dive-or-not debate.