Considered by most to be the best goalkeeper in the world, Bayern Munich and Germany goalkeeper Manuel Neuer won the World Cup in 2014, finished in third for the Ballon d’Or in the same year and has been the world’s Goalkeeper of the Year three year’s running. Now he’s committing his future to Bayern Munich – much to the many strikers who have failed to get the ball past him.

On an Instagram post from Bayern Munich, Neuer announced that he had reached a new deal with Bayern Munich, and held up a custom jersey with the number ‘2021’ – indicating he’ll be with the German giants for another five years.

The statement from Neuer read: “I couldn’t imagine signing anywhere else and I’m happy we sealed the deal now. I am looking forward to the future at Bayern.” 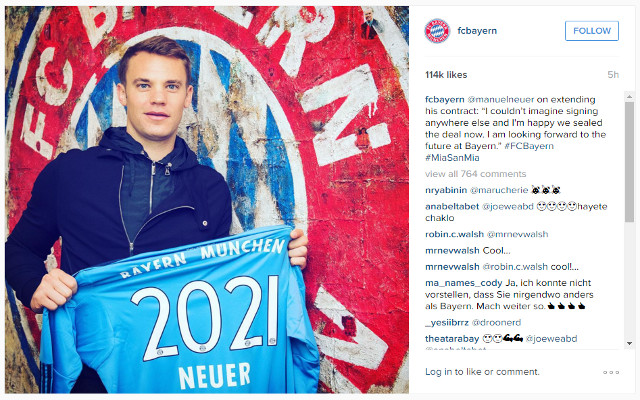 The 30-year-old goalkeeper has won three straight Bundesliga titles with Bayern Munich along with the Champions League back in the 2012-13 season. He is a two-time German Footballer of the Year and won the FIFA Golden Glove following Germany’s World Cup win.