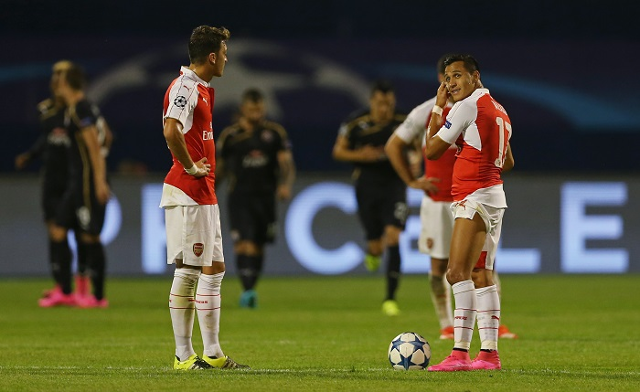 Arsenal manager Arsene Wenger has revealed that the club is in no hurry to reach agreements on new deals for Mesut Ozil and Alexis Sanchez.

The pair will both see their current contracts expire in two years time, and given Arsenal’s failings this season, it has been suggested that it could lead to the club’s key players questioning their futures.

However, Wenger is confident that both Ozil and Sanchez will commit themselves to the Gunners in time, but is adamant that there is no rush to push negotiations given the time frame that they are working with.

“These two players have two years to go on their contracts at the end of the season,” Wenger said, as reported by Sky Sports.

“So that is why we are not in a hurry. The players are very keen to stay and we are talking.”

It has been a disappointing season for Arsenal as they are set to end the campaign without a trophy. While their cup exits and Champions League elimination were sources of great frustration, it is their inability to stay in the Premier League title race which has produced the most anger.

As they now continue to battle to try and secure a top-four finish and qualify for the Champions League, it is no surprise that speculation regarding their top players has become more prominent.

The likes of Ozil and Sanchez should share the responsibility and blame for the disappointment this season along with their teammates and manager, but it could well lead to them questioning whether or not they have to leave in order to compete for silverware.

Two years is a long time to have left on a contract and so to an extent it is understandable as to why Wenger and the Gunners aren’t in any rush.

However, if months go by without any tangible progress in talks and Arsenal continue to fall short on the pitch next season, then concerns will rightly continue to grow and the club could be forced into a position next summer where they may well start to entertain offers.