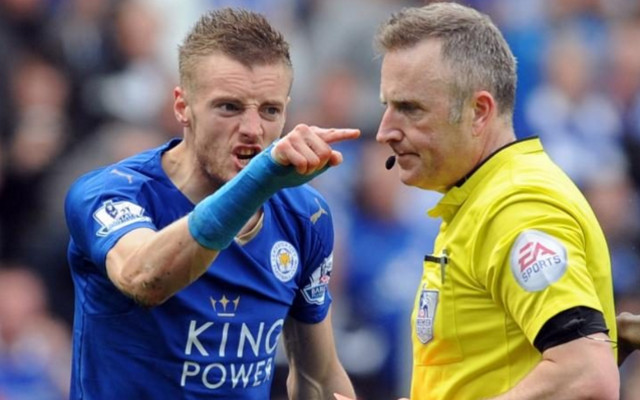 England manager Roy Hodgson has claimed that Jamie Vardy did not dive in Leicester City’s 2-2 draw with West Ham United last weekend, according to BBC Sport.

Hodgson does not believe that the 29-year-old should have been sent off for a second yellow card, and has also defended his verbal assault of referee Jonathan Moss.

“I think there was a very slight contact with the defender [West Ham’s Angelo Ogbonna], who was trying to cover. But of course all the pundits I hear say he was trying to dive, look how he dived. I don’t see it. I wouldn’t blame him for that. I sympathise with him. I think he was very, very unlucky.”

Vardy, capped six times by Hodgson for England, has been charged with improper conduct by the FA for his reaction to his dismissal as he seemed to berate the official.

But Hodgson has suggested that he understands Vardy’s response. The striker wagged his finger in Moss’s face and appeared to swear at him, The Mirror reports.

“He has reacted like human beings sometimes react,” Hodgson added to BBC Sport. “He hasn’t just said to the ref, ‘that is all right, I understand’ and shake hands and have a good game.

“He has called him a few names. But he is a human being and that can happen.”

This is nothing more than Hodgson protecting one of his own. Publicly criticising the 22-goal forward so close to Euro 2016 would have put him in an awkward position.

But England internationals should not be exempt from punishment. Vardy is banned for Leicester’s visit of Swansea City and could face a further one-game suspension.