Liverpool will go in search of a fifth successive win when they welcome former manager Rafael Benitez and his relegation-threatened Newcastle United side to Anfield.

This has always been one of the Premier League’s highlight fixtures, but this week it plays second fiddle to Liverpool’s Europa League semi-final first leg with Villarreal.

Jurgen Klopp is likely to continue his rotation policy, which has far from hurt the Reds so far. Here, CaughtOffside predicts what lineup he will go with on Merseyside.

Klopp’s Europa League team will look similar to the one which started Wednesday’s 4-0 thrashing of Merseyside rivals Everton, and that could mean as many as eight changes against the Magpies.

Youngsters Danny Ward and Connor Randall got outings the last time that Klopp rotated – against Bournemouth – but might find themselves omitted in favour of more senior names this weekend.

There is no reason to rest No.1 goalkeeper Simon Mignolet, but Alberto Moreno, as well as fellow full-back Nathaniel Clyne, can be saved for Villarreal, so that means another opportunity for Brad Smith.

Jon Flanagan is deserving of another start at right-back after a few weeks out of the fold. Martin Skrtel and Kolo Toure should be the defensive partnership to allow Dejan Lovren and Mamadou Sakho a rest.

Injuries to Emre Can and Jordan Henderson in midfield mean that James Milner is too precious to risk ahead of the semi-final. Joe Allen, Kevin Stewart and Lucas Leiva might make up the midfield three.

Philippe Coutinho and Adam Lallana are likely to be held back, with Sheyi Ojo and Jordon Ibe a pair of flying young wingers entrusted with creative responsibilities in the absence of more established names.

Klopp’s main dilemma comes up front. The ankle injury to Divock Origi, ruled out for four to six weeks according to The Guardian, has ruined the rotation policy he had going with Daniel Sturridge.

The Liverpool boss will now need Sturridge against Villarreal, but his fitness record may deter Klopp from playing him twice in a week. Christian Benteke and Danny Ings are also sidelined. The solution – the restoring of Roberto Firmino to the central striking role that he excelled in at the beginning of 2016. 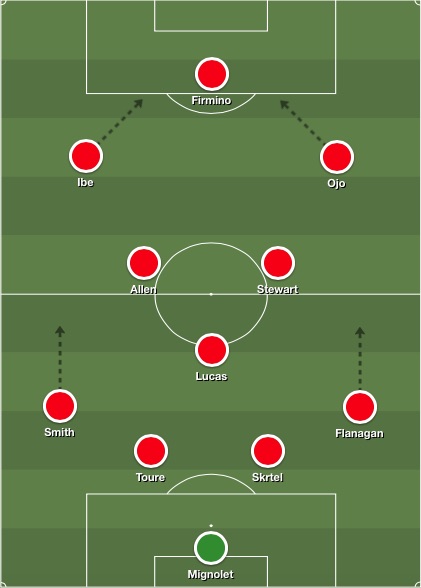