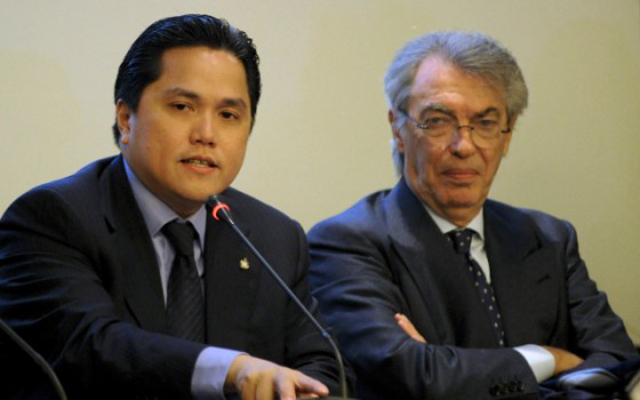 Inter President Erick Thohir is reportedly negotiating a sale of the Italian giants, with a list of English clubs next on his radar.

The Indonesian businessman is said to have grown frustrated with the amount of red tape in Italy which has denied him the opportunity to expand and implement his plans.

In turn, he has held a dinner with Suning Group President Zhang Jindong this week with suggestions that the two parties discussed a potential sale, according to Ansa, as reported by Football Italia.

Former patron Massimo Moratti, who still owns 29.5 per cent of the club, along with Thohir, vice-president Javier Zanetti and several other influential figures at the Nerazzurri were present for the meeting, while 11 directors joined Jindong.

While the delegation is expected to be at Inter’s game against Udinese at the Stadio Giuseppe Meazza on Saturday night, it will only further fuel speculation that talks are on-going and are heading in a positive direction.

Previous reports have suggested that negotiations have been over a 20 per cent stake in the club, but latest developments suggest that the Suning Group are keen to buy the Italian giants outright, as noted by the report.

It is claimed by La Gazzetta dello Sport that Thohir will be willing to sell up in order to take his investment elsewhere, with a trio of English clubs on his radar.

West Bromwich Albion, Fulham and QPR have all been mooted as possible options for the wealthy tycoon, but there is of course a long way to go before he is in a position to move on.

Thohir is also the majority owner of MLS side DC United, and had ambition plans when he arrived at Inter in 2013. However, a lack of progress over stadium talks and with financial restrictions in place on the club, it appears as though he believes the time is right to hand it over as they look set to miss out on qualifying for the Champions League this season.