Has Alexandre Pato just dropped a major clue about his transfer future?

The Chelsea squad have been given a few days off, with their next Premier League fixture against Tottenham Hotspur not until Monday. The benefit of having nothing to play for…

Some players have taken the opportunity to go on holiday, including Pato, who uploaded this shot of himself and his sister outside of Milan Cathedral to his official Instagram account. 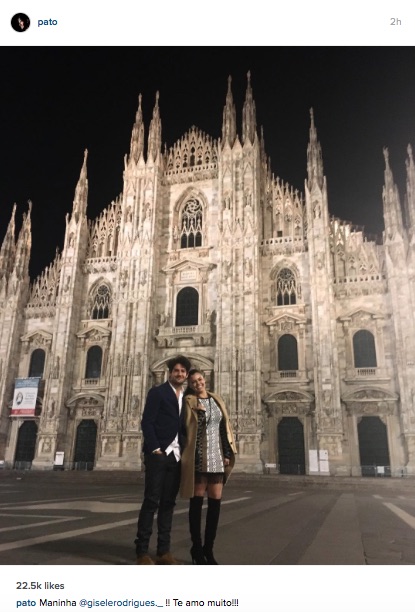 The Brazilian could have chosen anywhere, a new destination and new experiences, but instead decided to return to the city where he has enjoyed the most successful spell of his football career.

Pato made his name at AC Milan, scoring 63 goals in 150 appearances. He returned to Brazil in 2013, and joined Chelsea on loan in January, but has only made two appearances for the Blues so far.

The 26-year-old is not expected to stay at Stamford Bridge beyond the summer, and going back to Corinthians remains far from the only possibility. Could a return to the San Siro be on the cards?

Perhaps his footballing home will always be Milan. That’s where his heart seems to lie.

SEE MORE:
Disgusted football legend slams Antonio Conte’s agreed move to Chelsea
Chelsea flop told his time is up at Stamford Bridge despite managerial change
Antonio Conte to try adventurous new formation at Chelsea – these are the players he wants for it