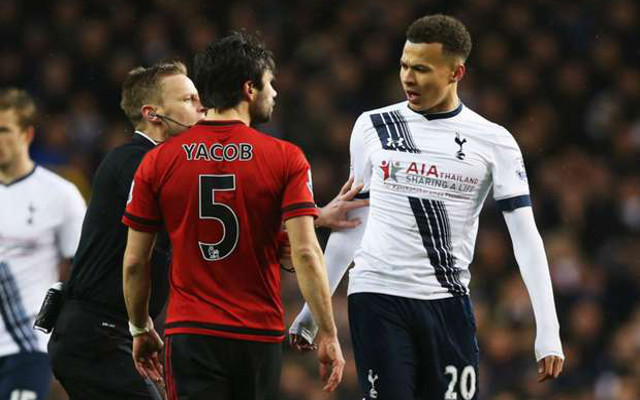 On the heels of Leicester City scoring machine Jamie Vardy being handed a match ban against Manchester United on Sunday, Tottenham Hotspur will face a major obstacle of their own in the effort to keep pace with the Foxes as star midfielder Dele Alli has been charged with violent conduct by the FA.

According to the Telegraph, the charge comes from an alleged punch to the stomach of West Bromwich Albion defender Claudio Yacob during the Spurs’ 1-1 draw at White Hart Lane on Monday.

If found guilty, Alli will face a three-game ban – which would keep him out for the final three games of the season.

The 20-year-old Spurs midfielder had a breakout season with 10 goals and nine assists en route to PFA Young Player of the Year honours and two Man of the Match awards.

The Spurs can lose the title on Sunday with a Leicester City win over Man United, but can keep their slim title hopes alive by winning their last three games if the Foxes pick up fewer than three points.

Not having Alli available for any of those last three games will likely place a huge burden on the already-demoralized team. But if Leicester could win a game without Vardy, maybe the Spurs can win one without Alli.

SEE MORE:
Leicester City boss: We haven’t won the title yet, “I believe only in the mathematics”
UEFA Champions League: Tottenham Hotspur can lock up spot this week
Barcelona plotting hugely ambitious overhaul with six out and 10 targeted