Gunners lead Liverpool in chase to sign young Dutchman, who has been likened to legendary Manchester United striker.

Although Mesut Ozil, Alexis Sanchez and Petr Cech have been signed by Arsene Wenger in the past three seasons, the Arsenal boss remains generally reluctant to risk big bucks on players who fall into the ‘finished article’ category.

Mr Wenger has long been known as a manager who prefers to identify young or relatively obscure talent, before attempting to create superstars, rather than buy them. That policy – of trying to pluck a diamond from the rough – will be persevered with.

This summer – as has been the case since Robin van Persie left in 2012, after scoring 37 club goals in his final season in North London – a striker is top of Wenger’s wish-list.

Arsenal’s alleged pursuit of Karim Benzema dominated many national newspapers last summer, but that was never going to happen, nor will it this time around. CaughtOffside has learned that Wenger’s primary striking target is a man who is seven years Benzema’s junior, with almost 80 fewer international caps than Real Madrid’s French frontman.

A trusted Gunners source informs us that AZ Alkmaar’s Vincent Janssen is wanted by Wenger, who hopes to further the young Dutchman’s remarkable rise by fast-tracking him to elite club competition next term.

Janssen only moved to Alkmaar last year, when he left second-tier Almere City FC, but he has flourished during his first campaign in the Eredivisie. He currently leads the league’s scoring charts, having bagged 25 times in 32 appearances for AZ, who sit fourth in the table.

Below: Arsenal target Janssen kisses the badge of his current club. 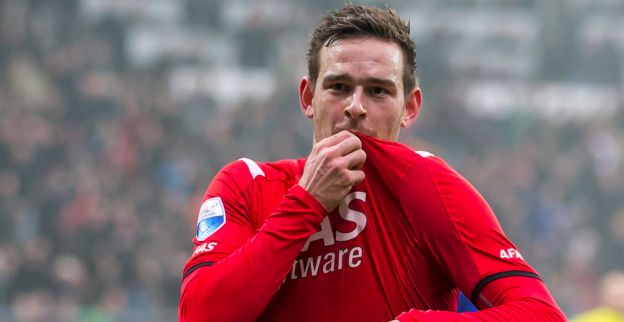 Janssen is certainly a diamond in the rough – in that he is a youngster with limited experience who belongs to a what is traditionally a selling club. However, his ability is no secret. Comparisons with Manchester United legend Ruud van Nistelrooy have already been drawn, while Liverpool are also understood to be keeping tabs on the 5ft 11in goal machine.

AZ’s latest hero will leave Alkmaar. That is inevitable, whether it comes this summer or next. He has another three years left to run on the contract he penned in 2015, but that will count for little should – as expected – Arsenal come calling in the off-season.

Although AZ will demand a club-record transfer fee to sanction Janssen’s sale, both Arsenal and Liverpool have the resources to pay such an asking price and still be left with plenty of change to make other necessary additions. To date, Jozy Altidore is the most expensive player ever sold by AZ, who received around £7m when the forgettable American moved to Sunderland in 2013.

Should Liverpool and Arsenal go for Janssen, the Gunners would be big favourites to win the transfer battle. For one, Arsenal are more likely to be able to offer Champions League football, something which the player has his heart set on.

Furthermore, it would be much harder for Liverpool manager Jurgen Klopp to promise Janssen first-team football, considering Daniel Sturridge, Roberto Firmino, Divock Origi and Danny Ings may all be competing for one striker’s starting spot at Anfield.

Janssen is still young, true. And, yes, the Eredivisie is vastly inferior to the Premier League – a statement evidenced by the fact a 35-year-old Dirk Kuyt has scored 18 times this season. But Wenger is confident in his own judgement and seems to fancy that this guy could be the real deal.

The Gunners would be wise to get this signing secured as soon as possible. Hesitancy could not only allow Liverpool to edge ahead of them in the queue. If Janssen continues to perform like he has done all season, Arsenal may acquire some even more serious competition.

In truth, most major clubs – especially those in England – are already aware of Janssen. Even the most out-of-touch scouts will have watched him make an almost-instant impact at international level last month, when he marked his second senior appearance for Holland by scoring from the penalty spot before setting up the winning goal in a 2-1 victory over Roy Hodgson’s Three Lions.