The agent of Andriy Yarmolenko appears to have revealed transfer talks with Liverpool with an Instagram post which proves that he was at the club’s London office on Tuesday.

This screen shot is taken from a video uploaded by Vadim Shabliy – representative of the Ukrainian winger, and might well provide an insight into Liverpool’s summer transfer plans.

The hashtags of #transferwindow and #fcliverpool seem to be a giveaway! 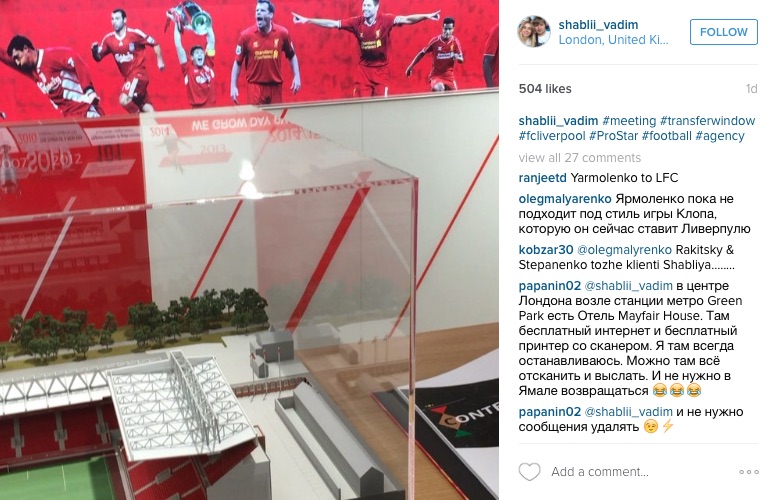 Yarmolenko seems poised to be made available this summer. Dynamo Kiev president Ihor Surkis has admitted that it is time for him to further his career after years of speculation.

“We cannot spoil the career of Andrey Yarmolenko, Aleksandar Dragovic and others who need to be let go,” Surkis is quoted as saying by the Daily Mail this week.

“We can look for a replacement, but the primary task is to give a chance to young players.”

Everton have been more prominently linked with the 26-year-old and the Daily Mail reports that manager Roberto Martinez watched Yarmolenko, valued in the region of £20m, back in February.

But this development suggests that it could be a Merseyside tug-of-war for the talented attacker, who has scored 13 goals in 22 league starts this season, and 80 in 193 league games in total.