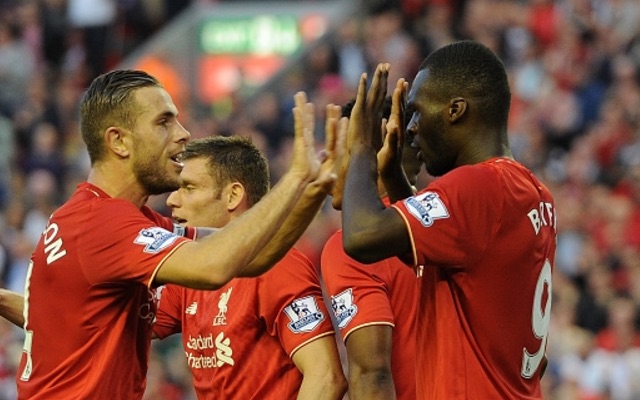 Anfield flop astonishingly on course for pay-rise should he swap Merseyside for Manchester.

Manchester United are determined to recruit a target man this summer and CaughtOffside has learned that the club’s current shortlist includes Zlatan Ibrahimovic and Liverpool outcast Christian Benteke.

Nine teams have scored more Premier League goals than the Red Devils this season, while none of their players have reached double figures. Youngsters Anthony Martial and Marcus Rashford both look like fine prospects for the future, but, with Wayne Rooney set to switch position and convert to a midfielder, the Old Trafford outfit are desperate to bring in another senior striker.

Ibrahimovic is available on a free transfer, as his PSG contract is up at the end of June, but the 34-year-old has many of Europe’s top clubs chasing his signature and will therefore demand wages in the region of £500,000 a week on a short-term deal.

Benteke is not cheap either – he currently earns £140,000 a week at Liverpool – and, while he too has many teams interested in him, United are one of the few possible suitors who are willing to match his pay. In fact, Red Devils chiefs would be willing to boost him up to around £150,000 if, as expected, they are able to agree a transfer fee of under £25m.

Liverpool paid Aston Villa £32.5m for Benteke last summer, but the 6ft 3in 25-year-old now finds himself out of favour, with Daniel Sturridge, Divock Origi and Roberto Firmino all preferred up front by Jurgen Klopp.

Transfers from Liverpool to United are rare because of the fierce rivalry between the two clubs. Only five footballers have ever made the move directly, with Allenby Chilton – in 1938 – the last to do so.

However, Benteke does not feel welcome at Anfield – and he clearly has no future under Klopp. Therefore, the big Belgian has little reason to show loyalty to Liverpool and his conscience is unlikely to prevent him signing for the most successful club in Premier League history.