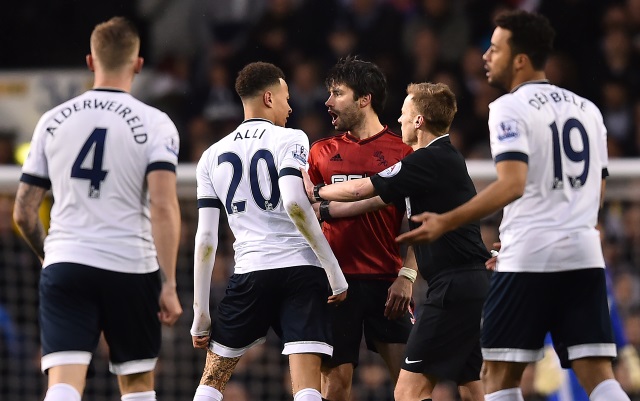 Seemingly unhappy with seeing Tottenham Hotspur‘s Dele Alli banned for the rest of the season following his punch on Claudio Yacob, Tony Pulis has questioned why the wonderkid has received such support.

The Welsh manager, speaking ahead of his side’s home game against West Ham United on Saturday, has praised his player for not reacting to Alli’s fist.

“I’m honestly staggered at how no one seems to have praised Claudio for his reaction,” Pulis told the media, as per the Daily Star, reflecting on Monday’s fixture.

“A lot of people have been backing Alli in all this, yet no one has said a dickie bird in standing up for Claudio,” the manager continued.

“He didn’t make a meal of it and I think he deserves a lot of credit for that,” Pulis proceeded.

“Have a look around at the players who roll around when they haven’t even been touched.

“That’s English players, as well as South American players, falling all over the place. I don’t think the kid has taken the credit he deserves.”

The match was notable for Albion defender Craig Dawson’s pair of goals, one against his own keeper to give Spurs the lead, and then the second late on as the Baggies rescued a point.

While the draw was enough to seemingly take Tottenham out of the EPL title race, Alli stole many of the headlines after his controversial tussle with Yacob.

However, while the referee missed the altercation, Alli subsequently received his just desserts, receiving a three-game ban which sidelines him for the rest of the Premier League season.

Ahead of their Monday evening fixture against rivals Chelsea, Spurs sit in second, seven points behind leaders Leicester City.

Pulis’s Throstles are in 13th, 10 points clear of the drop zone.