Borussia Dortmund ace Marco Reus poked fun at Bayern Munich in midweek, before quickly deciding to get rid of the evidence.

The 26-year-old chose Twitter as his platform to deliver his verdict after Bayern fell to defeat in the first leg of their Champions League semi-finals clash with Atletico Madrid on Wednesday.

Despite the fact that Pep Guardiola’s side dominated proceedings in terms of possession and chances created, Saul Niguez scored the only goal of the game to ensure that the Spaniards will travel to Bavaria next week with a slender lead.

Reus was seemingly pleased with the outcome as he posted an image of the match statistics which showed Bayern’s dominance, along with a caption: “Statistics don’t mean much if this is the result”.

The Germany international quickly moved to delete the tweet but evidently wasn’t quick enough to  prevent others from taking a screen grab.

While many appreciate the possession-based style of football that the likes of Barcelona and Bayern employ, there are others who aren’t particularly fond of it at times especially when there is a lack of urgency and goalscoring threat.

Reus appears to fall in the second category, although he looks set to be disappointed in the title race with Guardiola looking likely to sign off his tenure with the German giants with another Bundesliga triumph with Dortmund forced to settle for a runners-up spot. 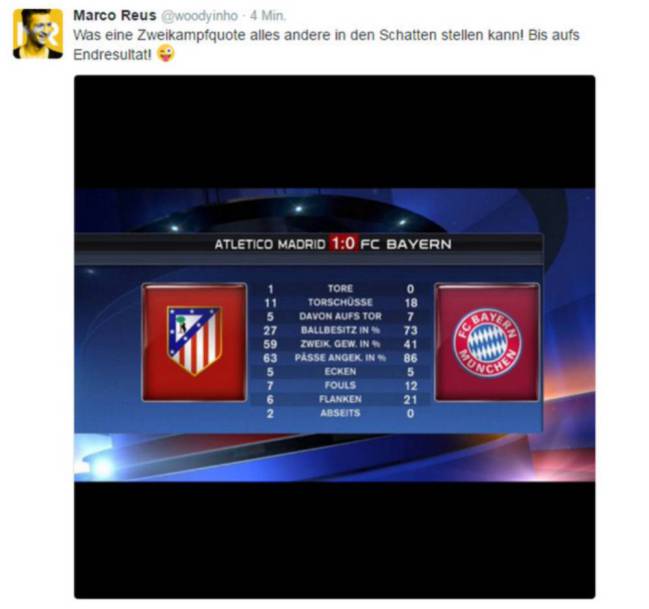