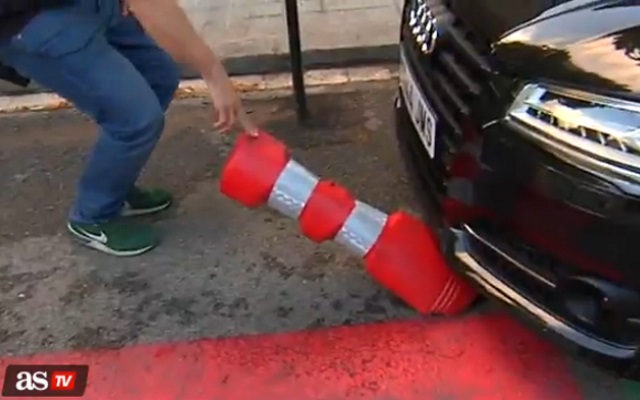 However, to call it a ‘crash’ is perhaps a little much, as the video shows, the Barcelona defender merely had a fairly humiliating collision with a bollard!

While not particularly damaging to Pique’s black audi, and certainly not in any danger of hurting the driver, the collision certainly represents an embarrassing moment for the centre-back.

According to AS, the Spain international was visiting his video game company, potentially as he attempts to take his mind of Barca’s testing title run-in.

Several weeks ago, Luis Enrique’s side were in the driving seat in the Spanish top flight, and looked set to claim the domestic title without much trouble.

However, the fine form of Atletico Madrid and Real Madrid, as well as Barca’s slump, has left Pique and his teammates clinging onto top spot with only three matches to play.

Ahead of Saturday’s trip to midtable Real Betis, Barca are level on points with Atletico Madrid—who host Rayo Vallecano—and are one ahead of Real, who are at Real Sociedat in Saturday’s early kick off.