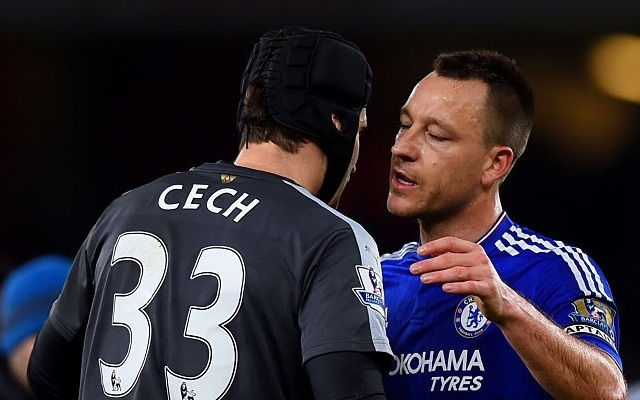 John Terry will have an option to stay in the Premier League next season regardless of whether or not Chelsea give him a new deal.

CaughtOffside has learned that Arsenal and Manchester City want to sign the former England captain on a free transfer if the Blues allow his contract run down.

Injuries have left both Arsenal and City vulnerable in defence at various points this season, and Terry – despite being beyond his best – would no doubt improve either side.

After signing Petr Cech from Chelsea last summer, Arsenal are hopeful of doing more business with their London rivals, even though Man City would be expected to put a bigger wage package on the table.

However, it is understood that Terry has no interest in joining either side.

A source close to the 35-year-old said: “John knows he’ll be in demand should he become available on a free, but there is zero chance he will do what Petr or Frank [Lampard] did and end up at one of Chelsea’s rivals.

“He is Chelsea through and through. He is desperate to stay where his heart belongs, but, if he does leave, he’ll be saying farewell to England – I can assure you of that.”

It would be fair to describe Terry as a one-club man – 695 of his 701 senior club appearances to date have been made in the colours of Chelsea, with the other six coming while out on loan at Nottingham Forest in 2000.

During his time at Stamford Bridge, he has won four Premier League titles, five FA Cups, three League Cups, two Community Shields, one Europa League and the 2012 Champions League – although he did not feature in the final because of suspension.

With nothing left to prove and no unwon trophies to challenge for in England, Terry is likely to head abroad to conclude his glittering career if Chelsea let him go.

Offers from China, America and the Middle East are anticipated, as well as hopeful – but inevitably unsuccessful – calls from Chelsea’s domestic rivals.

Serie A also remains an option, but Terry’s best offers – from a financial perspective at least – look set to come from outside of Europe.