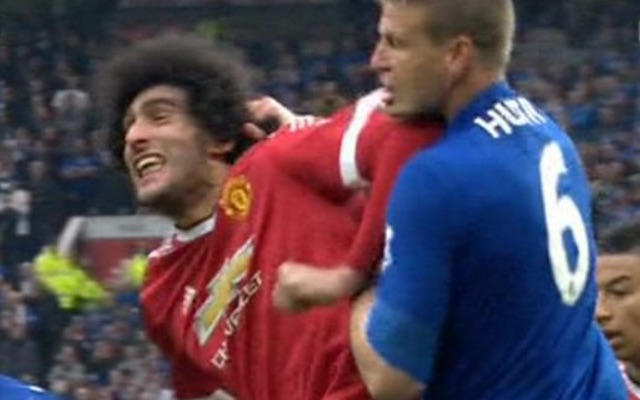 Marouane Fellaini loves a physical battle, by which I obviously mean he’s a really horrible footballer with violent tendencies.

In his defence, the curly-haired Manchester United badman at least picked on a worthy opponent when he decided to unleash his nasty side during the first half of Sunday’s Premier League game against Leicester City.

Marouane Fellaini attacks Robert Huth with an elbow/eye-rake combo. To be fair, Huth took it like a German! #MNULEI pic.twitter.com/K5KkAxdWdc

Former Chelsea defender Robert Huth is a right hard nut. And, in fairness, his elbows are often up to no good.

Still, it’s hard to condone Fellaini’s double assault on Huth, which included a swinging elbow, followed by what looked like an attempted eye-rake.

Fellaini will be very lucky to avoid a ban for his latest indiscretion.

Huth’s reluctance to make a big song and dance of the incident is unlikely to save him. After all, that did nothing for Tottenham’s Dele Alli, who picked up a three-game ban for punching the unflinching Claudio Yacob in his iron stomach on Monday night.

SEE ALSO:
New Man United away shirt leaked
£30m from Chelsea despite being sacked… now Man United could pay Mourinho for doing nothing too
Man United ready to splash huge cash on 31-goal superstar whose price has increased by £22m in 12 months