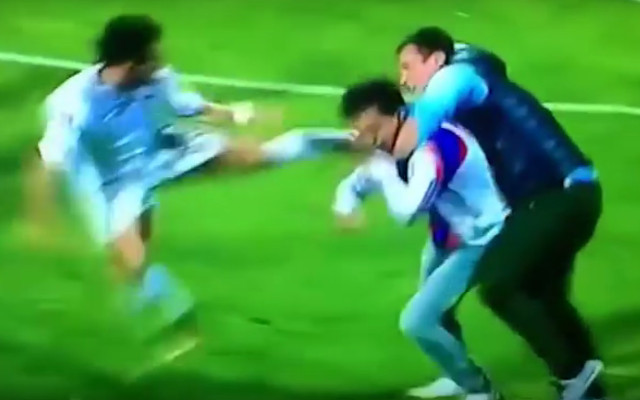 It has become almost a habit in the Turkish football league for angry/crazy/stupid fans to invade the pitch and attack the officials. It happened a week ago in a game between Turkish Super Lig giants Trabzonspor and Fenerbahce, and happened again on Saturday between Karabukspor and Elazigspor.

Only this time, the insane fan got way more than a simple tackling and an arrest.

This time, the insane fan got a karate lesson to the face: soccer-style:

During the video the fan threw what NBC Sports revealed to be wooden spoons (as for why, your guess is as good as mine) at the referee – missing with the first throw and preparing to launch the second missile at the player coming to help take him down, only to be awarded with a busted-up face for his efforts.

The security member trying to hold the fan down may have taken more of that kick though.

Regardless, we’ll see you in prison, crazy guy.

And we’ll see that football player in the next Mortal Kombat video game!