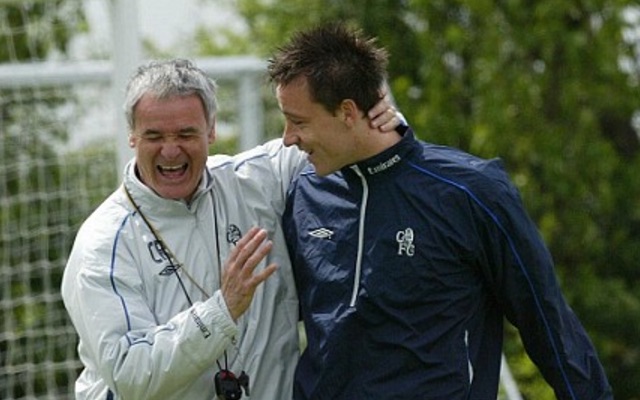 Less than an hour after the final whistle in Monday night’s 2-2 draw with Tottenham Hotspur, Chelsea skipper John Terry was on Instagram to add his best wishes to Claudio Ranieri.

Chelsea’s point at Stamford Bridge, where they fought back from two goals down, ended Tottenham’s title challenge and handed victory to Ranieri’s Leicester City with two games to spare.

Ranieri was Terry’s manager before the Italian was sacked by Roman Abramovich in 2004 and, judging by JT’s post, the Blues centre-back is still very fond of the Foxes legend, once known as The Tinker Man.

Congratulations to Claudio Ranieri and Leicester City ???? A real gentlemen and a top manager. ????????????

Bashing away at his phone with his fingers, Terry wrote a nice caption to accompany the photo of he and Ranieri embracing back in the day.

“Congratulations to Claudio Ranieri and Leicester City,” it read. “A real gentlemen and a top manager.”

Terry also used his mouth to pay tribute to Ranieri after Monday’s match. Speaking to BBC Sport, the 35-year-old claimed that his former boss was “different grass” – whatever that means.